Threes of the nine seals that were returned to Korea in 2014 during U.S. President Barack Obama’s trip to Korea. They include, from top, Sugangtaehwangje bo, which was created to commemorate the offering of the honorary title of “Sugangtaehwangje” to Emperor Gojong; Yuseo jibo, which was a stamp used on instructions addressed to provincial commanders in chief; and Junmyeong jibo, which was stamped on letters designating officials for operating the Education Council for the Crown Prince. [NATIONAL PALACE MUSEUM OF KOREA]

In July 2017, two ancient royal seals were brought on board the presidential plane with President Moon Jae-in and made a safe journey home from the United States after about 66 years. The royal seal of Queen Munjeong and the royal seal of King Hyeonjong are the two seals of the Joseon Dynasty (1392-1910) that were taken outside the country illegally during the Korean War (1950-53), like many other Korean cultural properties. Before they headed back to Seoul, the South Korean Embassy in Washington held a special ceremony wishing the two royal seals a safe flight.

In 2014, then-U.S. President Barack Obama personally brought nine seals that were illegally brought to the United States during the Korean War to South Korea, stating “the return was a symbol of the respect the U.S. has for Korea.”

The fact that the royal seals were sent via presidential plane, not to mention all of the media attention they received upon arrival, attests to the value of these cultural objects.

The seals - stamps used to authorize documents in lieu of signatures - were made during the Joseon Dynasty and the Korean Empire (1897-1910). There are two types of seals - guksae and eobo.

Guksae are state seals that were produced for the Joseon court for use on administrative and diplomatic documents. Meanwhile, eobo, or royal stamps, were fashioned for individual kings and queens as well as the crown princes and their wives as prospective successors to the throne. They were created in celebration of an investiture and other royal ceremonies. During the Joseon Dynasty and the Korean Empire, a total of 37 guksae and 376 eobo were crafted.

Sadly, many of the seals went missing when Japan occupied Korea in 1910. Numerous cultural properties were taken to Japan, including six guksae and two government stamps known as gwanin. It was only on Aug. 15, 1946, the first anniversary of Korea’s independence from Japan, when these stolen seals and stamps were returned to South Korea.

“When Japan surrendered to the Allied Powers and Korea was liberated on Aug. 15, 1945, the United States installed the United States Army Military Government as a temporary ruling body to govern the southern half of the Korean peninsula pending the establishment of an official government,” said Kim Byung-yun, an official from the Cultural Heritage Administration (CHA).

“One year later, the United States prepared a special gift for Korea to celebrate the first anniversary of their liberation. Under the auspices of General Douglas MacArthur, six seals and two stamps had been tracked down and found in Japan. During the first liberation ceremony, U.S. Governor John R. Hodge handed the symbolic objects to Korean independence activist Oh Se-chang, solidifying the relationship between the two countries.”

However, during the Korean War, three of the six guksae that had been repatriated with the help of the United States went missing once again. They were “Daehan Guksae,” which can translate to national seal of Korea, “Chikmyeongjibo,” or the seal for royal edicts, and finally the “Hwangje jibo,” or the seal of the Emperor, which Emperor Gojong, the 26th king of the Joseon Dynasty, ordered to be made after he declared the founding of the empire in 1897 as a symbol of national sovereignty. The efforts to bring the seals back began in 1953, as soon as the Korean War came to an end with the creation of the demilitarized zone. In order to locate the whereabouts of the royal objects, South Korea needed to cooperate extensively with the United States.

In 1953, U.S. daily newspaper The Baltimore Sun featured an interview with Yang Yu-cheon, who was then serving as the South Korean ambassador to the United States. In the interview, Yang appealed to U.S. citizens to understand the national significance of the Korean seals and how important it was for them to be returned to their home country. In an interview with the North American Newspaper Alliance in 1956, Ardelia Hall, a consultant with the U.S. Department of State, stated that the U.S. government would do its best in support of the restitution of the Joseon seals. 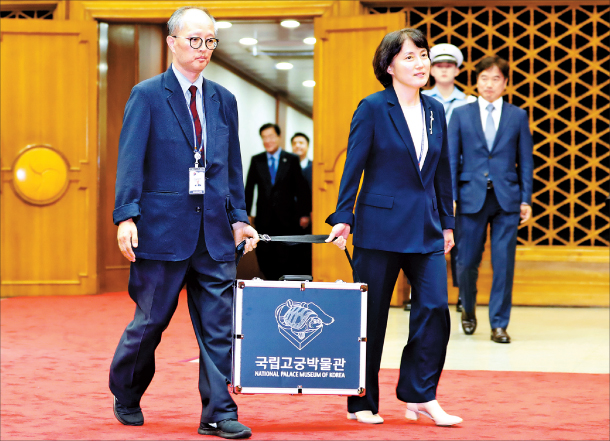 Kim Yeon-su, former director of the National Palace Museum of Korea, right, and Seo Jun, a researcher of the museum, left, carry a box that contains the royal seal of Queen Munjeong and the royal seal of King Hyeonjong that were returned to Korea from the United States during President Moon Jae-in’s 2017 U.S. trip. [YONHAP]

But for 60 years, no word was said about the seals. South Koreans slowly forgot about the seals, until Kim of the CHA received an email from the U.S. Immigration and Customs Enforcement’s Homeland Security Investigations Office (HSI) on Sept. 23, 2013.

“The subject of the email was ‘7 chops,’” said Kim, who is responsible for the repatriation of Korean artifacts at the CHA. “Seven photographs were attached to the email with a message asking whether these stamps were from Korea. As soon as I saw the photographs, I trembled.”

Kim could identify the famous Hwangje jibo, the national seal of the Korean Empire. “As my hands shook, I replied the email saying ‘These are Korean history.’”

After a thorough analysis, the CHA confirmed the authenticity of the seven stamps including three guksae and made an official request to the HSI Office to return the Korean properties. According to the CHA, the seals were shipped out of the country by a U.S. Marine lieutenant during the Korean War, who said he found them in a ditch near Deoksu Palace in Seoul in 1950 after it was ransacked by Chinese and North Korean soldiers. In November 2013, the U.S. Immigration and Customs Enforcement’s HSI’s directorate received the seals from the family of the deceased former Marine, and the seals were able to come back with Obama during his two-day visit to Seoul in 2014.

“Usually, it takes an average of about a year to seize objects after requesting the investigation,” said Kim. “But these nine objects were returned within a mere 28 days, which was quite surprising. We really appreciated it.”

Not all cases are as speedy.

As for the royal seal of Queen Munjeong, a gilt bronze seal that was made in the second year of King Myeongjong’s reign in 1574 to honor Queen Munjeong (1501-1565), it was rediscovered when the Los Angeles County Museum of Art (LACMA) acquired it from Los Angeles-based collector and dealer Robert Moore in 2000. LACMA issued a statement in 2013 that said there was “credible evidence” that its seal was “removed unlawfully from the National Shrine in Korea.” But the specific type of seizure that would be used in this case took a long time to be decided, which extended the process of its homecoming.

Finally in 2017, with the inauguration of new governments in both countries, the returning process for the two seals that had been on hold finally gained momentum. The civil judicial forfeiture method was selected to bring back the two seals, and in July 2017, President Moon brought them back from his first South Korea-United States summit. 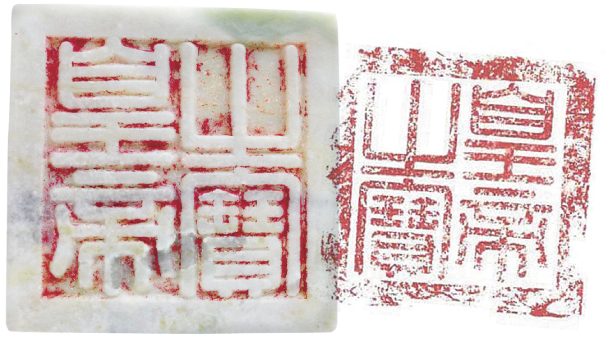 The mark left by the Hwangje jibo when it’s stamped on paper. [YONHAP]

Since every case of bringing back the precious cultural properties has a different story, the CHA says it is important for South Korea to closely cooperate with the related countries, as it did with the United States to bring back the handful of seals back to South Korea. The 75 from the Joseon Dynasty - 29 guksae and 46 eobo - have yet to come home. According to the CHA, those that were able to come back were able to do so because the “U.S. has an unequivocal understanding that the Joseon seals are an important symbol of Korea.”

Moreover, the administration says the fact that the “U.S. is equipped with fully-developed laws and regulations conducive to returning stolen objects” played a critical role.

“While the forfeiture of property is only allowed in other countries when the holder has been convicted of a crime, the U.S. institution of civil forfeiture permits the seizure of stolen property regardless of the criminal conviction of the holder,” explained Kim. Moreover, over the past 60 years, the National Stolen Property Act and the common law of the United States have developed, which helped to “criminalize any act of knowingly receiving, possessing, concealing, storing, bartering, selling or disposing of goods valued at $5,000 or more which have crossed a state or federal boundary after being stolen.” The U.S. civil law also does not recognize good faith acquisition.

“We would also like to stress the important role the HSI has been playing,” added Kim. “It was established in December 2002, and the Cultural Heritage Administration signed a memorandum of understanding on the restitution of cultural property with the U.S. Immigration and Customs Enforcement, to which HSI belongs, in July 2014.”

Not all cases, however, go through such legal action.

As for the Deokjong eobo, the royal seal of King Deokjong (1438-57), it was returned to South Korea in 2015 by the Seattle Art Museum through an “amicable solution,” said the CHA. The seal, which is a copy created in 1924 when the original that was produced in 1471 to honor King Deokjong was acquired by a collector surnamed Stimson in New York in 1962. She then donated the seal to the Seattle Art Museum the following year, and it had been in the museum’s collection ever since. After becoming aware of its existence in 2014, the CHA sent an official letter asking if it would be possible for the museum to return Korea’s valuable treasure in a “friendly manner.” The museum accepted the proposal, acknowledging the seal as a stolen artifact, and it came home on Apr. 1, 2015.

“We’ve been making efforts to seize the stolen seals through legal action, but this sets a good example to the rest of the world,” said Kim. “I think it is time to expand the scope of the strategy to incorporate efforts such as disseminating information and educating people that these artifacts are national treasures, and positive relationships can be formed when the kinds of properties can be returned voluntarily.”

“Information and education are also in line with the spirit of the 1970 Unesco Convention on the Means of Prohibiting and Preventing the Illicit Import, Export and Transfer of Ownership of Cultural Property,” Kim added.

“Through these efforts, we can preempt any claims of good faith acquisition and can facilitate the process of proving a person’s intention to commit a crime.”