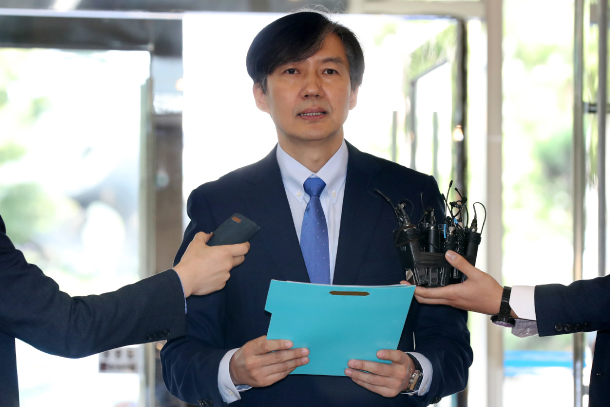 Justice Minister nominee Cho Kuk faced a new scandal about his daughter on Tuesday, following the revelation that a two-week internship as a high school student allowed her to be listed as the author of a paper published in a prestigious medical journal.

Cho’s 28-year-old daughter, currently attending the Pusan National University’s Graduate School of Medicine, was listed as the first author of an English-language paper published in the Korean Journal of Pathology in 2008, the Dong-A Ilbo reported Monday. At the time, she was a high school student and had attended a two-week internship at the Medical Science Research Institute of Dankook University’s College of Medicine, the report said.

In December 2008, a professor at that institute submitted a paper titled “eNOS Gene Polymorphisms in Perinatal Hypoxic-Ischemic Encephalopathy” to the Korea Society of Pathologists. Six authors were listed, including the professor, and Cho’s teenage daughter was named as the first author. The paper was published in the society’s journal in March 2009.

In academic publishing, the first author is typically the person who carries out most of the experiments and makes an important contribution to experimental design, data analysis, interpretation and writing of the paper.

She studied in a high school in the United States in 2005 and 2006, returned to Korea and entered a high school specializing in foreign languages in 2007.

In March 2010, she was admitted to Korea University through an early decision program. In her admission essay, she noted her authorship of the paper, the Dong-A Ilbo reported.

The main opposition Liberty Korea Party (LKP) said it will form a special team to investigate any academic misconduct by Cho’s daughter, such as if the essay played a decisive role in her admission to Korea University. The team will also investigate her suspicious winning of a scholarship for six consecutive semesters at the medical school, although she flunked two semesters.

“We are checking if she did actually made contribution enough to be listed as the first author and if she used the paper as a part of her application,” said an LKP official. “If any admission irregularities are suspected, we will consider taking the case to the prosecution.”

Cho’s daughter had a special connection to the professor in charge of the research. She was a high school friend of the professor’s son.

Cho’s team, assisting his preparation for the upcoming confirmation hearing, said Tuesday that the daughter’s contribution to the paper was legitimate. “She commuted a long way every day, actively participated in the experiments and contributed in writing the paper in English,” it said. “She received a good evaluation from the professor as she completed the paper with other participants.”

It also denied any illegality in her being named first author of the paper, adding that all judgments were made by the professor. It also denied that Cho and his wife were involved in the internship program.

Rep. Na Kyung-won, floor leader of the LKP, demanded Tuesday that President Moon Jae-in withdraw the nomination. “Cho was lenient to himself but vicious to other people,” Na said. “This is the true face of this administration.”

She urged the ruling Democratic Party (DP) to stop defending Cho. “He is simply unfit to serve as a public servant or a professor, not to mention as justice minister,” Na said. “Moon must make a bold decision now.”

Cho, a professor of law at Seoul National University, is one of the closest associates of Moon. He served as senior presidential secretary for civil affairs until July. Moon nominated him to head the Ministry of Justice earlier this month.

He will have to undergo a non-binding confirmation hearing at the National Assembly before a formal appointment, although the ruling and opposition parties failed to agree on a date. By law, the president doesn’t need endorsement from the legislature to appoint a minister, meaning Moon can go ahead and appoint Cho even without the blessing of the LKP after the confirmation hearing.

The Blue House on Tuesday said it is up to Cho to address the allegations.

“If the nominee needs to clarify ethics issues, he must do so if necessary,” a presidential aide said. “He must also explain his policy vision for a comprehensive evaluation. And the scrutiny must take place at the confirmation hearing of the National Assembly.”

He rejected criticism of the Blue House’s vetting system to select nominees.

The snowballing corruption allegations involving Cho and his family are ironic considering that Cho, as the first senior secretary for civil affairs of the Moon Blue House, set down the administration’s rules for nominations. He established the principles in November 2017 that individuals who committed any of seven major misdeeds would not be nominated for senior official positions.

The seven misdeeds were draft-dodging, tax evasion, illegal wealth management, use of a fake address to get kids into better schools or for real estate speculation, academic irregularities, drunk driving and sex crimes.

Cho and his family, however, have now been accused of at least five categories directly and indirectly.

Cho’s son delayed doing his military service five times so far, prompting the opposition to claim he is a draft-dodger. Cho’s team said Tuesday that the son plans to enlist next year.

Cho’s wife failed to pay income taxes on time, and she belatedly paid them this month.

Cho’s wife and two children made a dubious investment. They agreed in July 2017 to invest a combined amount of nearly 7.5 billion won ($6.2 million) in a private equity fund, which was more than the family’s reported wealth of roughly 5.6 billion won.

The trio ended up investing only 1.5 billion won in the end, but opposition lawmakers are wondering how they were planning to invest more than what they had and whether it was appropriate for a high-level government official’s family to make such a big investment right after getting appointed to the Blue House.

The fund also made investments in a mid-size company, which later won a series of state construction projects. Opposition lawmakers suspect that Cho used information obtained while serving at the Blue House to increase his family wealth.

Cho was accused of using a fake address to allow his daughter to be enrolled in a school in Seoul in 1999, when he was working as a professor at the University of Ulsan.

In addition to Cho’s daughter’s alleged academic irregularities, Rep. Lee Eun-jae of the LKP said last week that Cho himself is guilty of multiple cases of plagiarism and self-plagiarism.

Those accusations are not new, and Seoul National University’s Committee of Research Integrity already cleared him of the charges last year. Lee, however, insisted that was a political decision.

The ruling party is adamantly supporting Cho. “Our lawmakers reviewed the accusations against him, and we conclude that they are groundless slander,” said DP Rep. Song Ki-hun.

Rep. Lee In-young, floor leader of the DP, also said the LKP is making up accusations. “A confirmation hearing is not a legitimate opportunity for privacy violations,” Lee said.

“It is true that the daughter issue and the private equity fund issue irritated the public a bit, but DP lawmakers believe they are not critical enough to withdraw Cho’s nomination,” a three-term DP lawmaker told the JoongAng Ilbo.