Big Hit Entertainment gets innovative: Agency behind BTS looks to revolutionize the music industry at home and abroad

Big Hit Entertainment gets innovative: Agency behind BTS looks to revolutionize the music industry at home and abroad 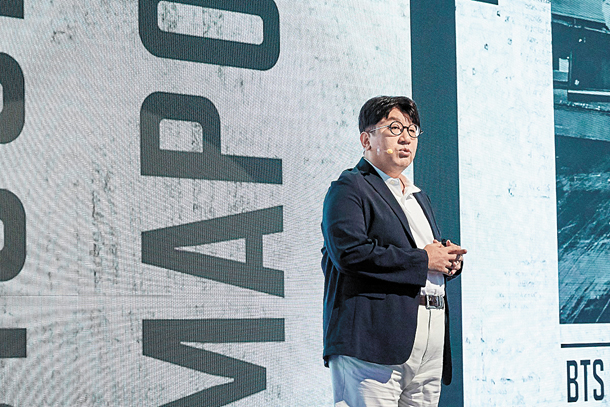 Big Hit Entertainment aims to be the leader of innovation in the global music market, CEO Bang Si-hyuk said on Wednesday.

The entertainment agency, home to K-pop superstars BTS, held “Big Hit Corporate Briefing - With the Community” on Wednesday at the Korea Textile Center in southern Seoul to review the company’s success over the past few years and present its grand future plans to innovate not only itself as a company, but the entire international music industry as whole.

“As BTS has become immensely popular in recent years, the number of times people talk about Big Hit Entertainment has increased,” said Bang. “The company gets news coverage from outlets both big and small, for which we are always grateful. But today is not about just our revenue or a merger. Today is about explaining the bigger picture that we have in our mind, that is, to bring about revolution in the music industry.”

Big Hit Entertainment was founded on Feb. 1, 2005 after producer Bang separated from JYP Entertainment. In the early days of the company, Bang continued to work as a producer within JYP, maintaining a congenial relationship with his previous team. Big Hit launched its first act, girl group GLAM, in 2012 together with Source Music, but the group failed to make a splash.

In 2013, the company presented their very own group made up of fresh faces, without the help of any other entity - BTS. The septet debuted on June 13 with their EP “2 Cool 4 Skool,” and broke through in 2016 with their popular tracks “Fire” and “Blood, Sweat and Tears.” From then on, BTS took the music world by storm, re-writing history with every new record they set.

Yet, Bang’s visions do not stop at increasing profits. “We seek to change the music industry as a whole, not just in Korea, by fully realizing the value of music, by increasing the size of the music market, by bringing change to the system, so that the industry and the people working in it all live better lives,” Bang said.

The agency’s road to revolution focuses on three visions, which include revolutionizing the customer experience for fans, innovating a new platform-driven experience and creating a value chain of business with their intellectual properties.

According to Yoon Seok-jun, the co-CEO of Big Hit Entertainment, BTS has created around 500 billion won’s worth of economic value in the local market, citing a report by Professor Pyun Ju-hyun of Korea University’s Business School. During the four days that BTS held fan meeting events this year, BTS had an economic impact of 136 billion won in Busan and 346 billion won in Seoul, counting both the direct and indirect effects the group had on the local market.

“We will create a new concert-going experience for fans, who currently need to pay large amounts of money and endure a series of hardships in order to attend,” said Yoon.

The company’s plans include selling merchandise online so that fans don’t have to start lining up early in the morning to get their hands on limited edition goods and providing chairs and tables outside of concert venues so that they can wait comfortably instead of standing up or sitting on the ground. Food trucks and other vendors will also be nearby, so that fans don’t need to worry about bringing their own food with them.

Tickets for local K-pop concerts have traditionally been sold on a first come, first served basis, giving fans mere seconds to secure a chance to see their favorite acts. But since the rise of illegal programs that scalpers use to get tickets so that they can sell them at a higher price, the process has become even more difficult. To give fans a better opportunity to see their favorite acts perform live, Big Hit started a lucky draw system this year, in which members of a group’s fan clubs are picked at random and offered the chance to buy tickets.

“We will extend our lucky draw system for concert tickets to make sure that the injustices that happen while ticketing to do not occur any more,” he said. “But ultimately, we believe that enjoying a concert should be different in the future. Regardless of where you are and when [the concert is], you should be able to enjoy the atmosphere just the same. It will be designed to meet different people’s needs, but in a way that everyone gets to enjoy the same energy.”

Weverse, a community app, offers fans the ability to easily interact with others around the world. Weply, an e-commerce app, allows fans to purchase merchandise and tickets.

“Bang told me that he had a plan to go to the space, so he needed me to make a rocket,” said Steve Seo, CEO of beNX. “We were dedicated to build that rocket to lead the revolution. Our company is made up of people who closely study fan [culture] to make sure our services are geared towards creating the best experience for fans.”

CEO Bang hinted at two projects to launch in the next year while explaining the agency’s plans to utilize their intellectual property to fortify their brand identity. While the agency already has plans for novels, animated series, comic books and movies, it will also release a big budget drama in partnership with one of Korea’s major TV channels, as well as another mobile game in collaboration with game company Netmarble.

Big Hit Entertainment has already created a series of popular products, such as the Netmarble game BTS World, their webtoon series with Naver and their dolls with Mattel. BT21, the characters that BTS co-developed with Naver’s Line, is one of the most successful products established under the agency’s business model. All are a part of the company’s efforts to “recreate the stars into living characters that will live on forever and give fans a difference experience with them,” according to Bang.

“We at Big Hit seek to change the paradigm in the music industry and improve the quality of life of those who work in the music industry. We will work to expand our business models to go beyond [conventional] borders to provide high-quality content and give consumers the best experience.”