Mirae Asset Daewoo Chairman Park Hyeon-joo has led Mirae Asset’s expanding global business to new heights in the year since he stepped down as chairman of Korean operations to lead the global brokerage business as both chairman and global investment strategy officer of Mirae Asset Daewoo Hong Kong.

According to an earnings report from Mirae Asset Daewoo, the combined net profit of the group’s overseas subsidiaries recorded 87.2 billion won ($72.4 million) in the first half. Due to the impressive performance of Mirae Asset’s brokerage business, the group’s overall overseas profit is expected to reach nearly 130 billion won for the first half of the year, exceeding the company’s performance for the whole of 2018.

The achievement is significant not just for Mirae Asset Daewoo but for the Korean financial investment industry as a whole. The industry has struggled in the first half of this year due to various unfavorable external factors such as Japan’s export restrictions on Korea and the U.S.-China trade war.

Mirae Asset Group has been aggressively investing overseas for years. Starting with the acquisition of Pudong in Shanghai in 2006, the firm took over the world’s No. 1 golf equipment brand Titleist in 2011 and invested in the world’s leading drone maker DJI last year. 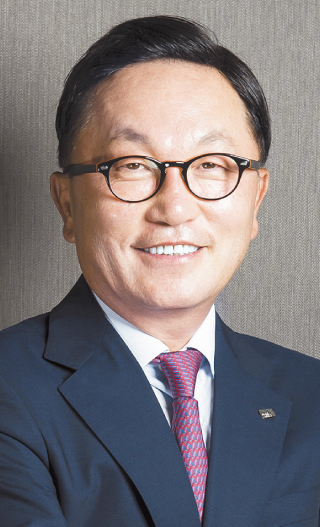 Since the launch of Mirae Asset Daewoo, the group has seen strong results through active global investment. Recently, Mirae Asset decided to sell the T8 building in Frankfurt, Germany for 400 million euros ($443 million). When the sale is completed, the investment is expected to yield an internal income rate of more than 25 percent annually, with dividends of about 7 percent during the investment period.

Mirae Asset Group has laid the foundations for expanding its global business by making big deals overseas. It made investments in such diverse projects such as the Las Vegas Cosmopolitan Hotel, the Amazon Logistic Center, the Cannon Bridge House Building in Britain and the Center Building in Hong Kong. The company also invested in online marketplace company Big Basket in India and a new landmark creation project in New York’s Time Square.

Mirae Asset Daewoo has the most foreign branches of any Korean brokerages and has been successfully running a wide range of investment engines through an enhanced global network with equity capital of approximately 3.3 trillion won.