Shops get serious about furniture

Shops get serious about furniture 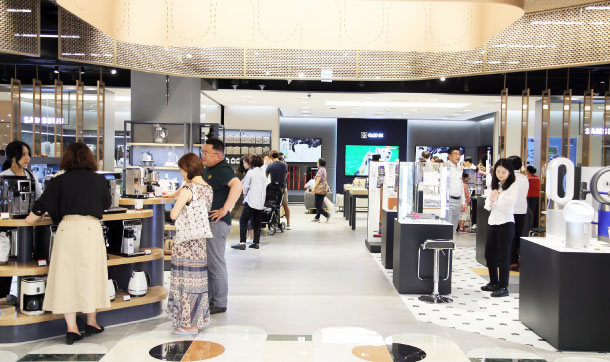 Department stores are bolstering their home furnishing offerings as redecorating your home with a focus on interior design becomes increasingly popular in Korea.

Shinsegae Department Store on Monday said it has dedicated the entire eighth floor of its Gwangju branch to the home furnishing section, a considerably upgrade from the corner of the basement that it used to occupy. The retailer said in a statement that it made the change to cater to the growing demand for home furnishing equipment.

“In the past, people splashed out on luxury products as a means to show off to others, but consumers now open their wallets as an attempt to fully enjoy their own time and space,” said Shinsegae in the statement.

The home furnishing section sells items for the living room, bedroom, kitchen and dining room, including an area dedicated to high-end electrical appliances.

Its rivals have also been bolstering their home furnishing sections.

Hyundai Department Store last July relocated the women’s fashion floor in its World Trade Center branch in Gangnam, southern Seoul, to the fifth and sixth floors from the fourth, creating a space for a luxury home furnishing section. Hyundai also renewed the home furnishing floor in its Cheonho branch in eastern Seoul in January last year, seeing an average 30 percent monthly sales growth ever since, according to the retailer.

Noting the United States and Japan, which saw rapid increases in home furnishing sales once their per capita income hit $30,000, Hyundai explained that Koreans’ increased spending on home furnishing is a natural trend.

Lotte Department Store is renewing the home furnishing section at its main branch in central Seoul to celebrate its 40th birthday this year. It has reorganized the store to allocate space by category rather than brands and has bolstered experiential events like cooking classes hosted by well-known chefs.

“Recent domestic retail trends show a consumption pattern of spending [for decorating] the residential environment, which is shown in developed nations,” said a spokesperson from Shinsegae Department Store. “We plan to expand the home and furnishing section and introduce diverse brands for consumers whose tastes have shot up.”