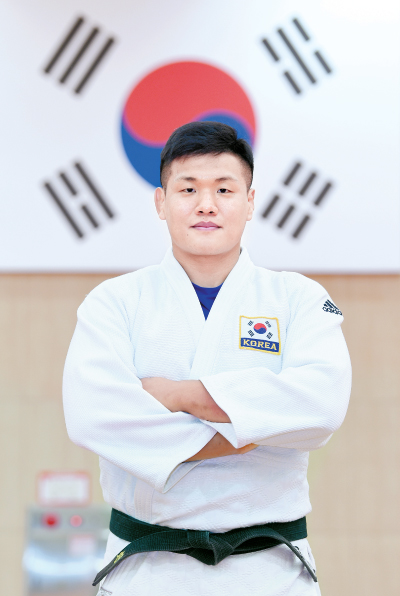 Korean judoka Cho Gu-ham has set his sights on defending his title in the men’s 100 kilograms (half-heavyweight) category at the 2019 World Judo Championships in Tokyo from Friday.

Cho, the current world No. 2, enters the 2019 World Judo Championships as defending champion. In 2018, he defeated top-ranked Varlam Liparteliani of Georgia.

The 2019 World Judo Championships, which began on Monday, is especially important because this year’s event provides one of the last opportunities for judokas to test their skills against the very best in the world before the 2020 Tokyo Olympics. The championships is also held at the same venue as the Tokyo Olympics.

“It feels like I’m getting ready for a mock test ahead of the Olympics,” Cho said. “I do want to win, but I’ll be competing patiently thinking this is a step toward the Olympics next year.”

In the men’s 100 kilogram event, the majority of the judokas are 1.90 meters (6 feet 2 inches) or taller. European judokas tend to dominate the event as they tend to be taller. Comparing Cho to the average judoka in the event, he is considered very small at just 1.77 meters tall. Despite the disadvantage, Cho upset the event with his skill and strength.

Cho worked hard to build up that strength. As well as two intense training sessions every day, Cho also adds an extra 400 reps with a resistance band before going to bed. This extreme schedule paid off, and he slowly climbed his way up the leaderboard.

Using his strength to his advantage, Cho plays defensively at the beginning and gets offensive toward the end of a match, when his opponents start to tire. Due to this, a lot of his matches go into overtime, including the final game last year that saw him crowned world champion. His strength gives him the endurance to outlast his opponents.

“The physical training of Korean judo is probably the world’s best,” Cho said. “I’m confident that I won’t fall behind in physical strength, no matter who the opponent is.”

To add more competitiveness, Cho recently added another skill in addition to his best move, the shoulder throw.

“I can’t win against the world’s best just with a shoulder throw,” Cho said. “But a second skill can surprise the opponent.”

Interestingly, Cho has traditionally done well competing in Japan. Of the five international events Cho has competed in, in Tokyo, he has picked up two gold and two silver medals. This is another reason why Keum Ho-yeon, head coach of the Korean men’s judo team, considers Cho a likely candidate to take gold at the Olympics. Behind Cho’s success, Keum emphasized his hard work.

Although Cho started judo in the fourth grade, it took him a lot longer to earn recognition compared to other judokas of his age, as he was first added to the national team while attending college at Yongin University. However, even after he joined the national team, it took him years to receive the spotlight as judokas like Gwak Dong-han, An Chang-rim and An Ba-ul, all of whom are Cho’s age, were already making names for themselves at international tournaments.

Making matters worse, when Cho competed at his first Olympics in 2016, he was eliminated in the round of 16 as he wasn’t able to use his left foot due to injury.

Cho underwent surgery after the Rio Olympics and after about 15 months of rehabilitation, he finally returned. At the 2018 Asian Games in Jakarta-Palembang, Cho won silver, and at the 2018 World Judo Championships, he won gold.

In the four international tournaments he competed in this year, Cho had podium finishes every time, winning gold, two silvers and a bronze.

“Whenever I heard my rivals winning, I fought through rehabilitation thinking that’s where I should be,” Cho said. “It was more difficult than six years ago, when I tried to lower my weight division.”

Up until 2013, Cho competed in the heavyweight event for judokas over 100 kilograms (220 pounds). Though he dominated the event in Korea, he wasn’t able to continue his dominance internationally. Due to this, Cho decided to lower his event to half-heavyweight, losing 25 kilograms in five weeks.

Having finally reached his peak in his career, Cho has now set his sights on winning gold at the Tokyo Olympics. At the Rio Olympics, the Korean men’s judo team walked away with no gold medals for the first time in 16 years.

“I’ll save Korean judo by conquering the world championships and the Olympics,” Cho said.

Korea has already picked up a silver at the world championships. Kim Lim-hwan came second in the men’s 66 kilogram event on Monday.