LG U+ will offer GeForce Now for 5G gaming

LG U+ will offer GeForce Now for 5G gaming 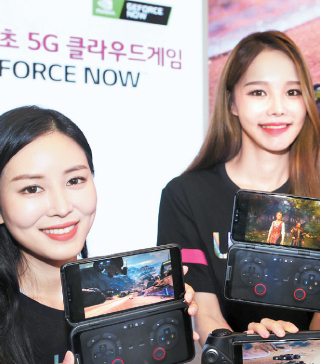 Models demonstrate Nvidia’s GeForce Now, a streaming game service that will be introduced to domestic players early next month on the 5G network. [LG U+]

Mobile operator LG U+ on Tuesday said it will introduce Nvidia’s 5G cloud-based games in Korea starting early next month.

GeForce Now is a cloud-based service that enables users to stream games directly from servers. Players don’t need to own devices with a powerful graphics processing unit to play intensive games. It also allows users to play the game on PCs, mobile devices and TVs. Gamers using different gadgets can compete on the same game.

LG U+ said it will offer a total of 150 PC games, including Monster Hunter: World and Dark Soul 3. The company plans to expand the number to 200 by the end of the year.

“As the first telecommunications company partner of GeForce Now, Nvidia regards LG U+ as a very important partner,” said Kim Seung-kyu, a representative of Nvidia Korea, at a press event held in central Seoul on Tuesday. “We can offer GeForce Now to domestic game users for the first time in the world based on LG U+ 5G network.”

Korea’s smallest mobile operator’s ambition is to attract game players in their 20s through 40s to its 5G services, who will be offered discounts on gaming service subscription rates.

“Our primary targets are young men in their 20s who wish to play games but aren’t able to afford purchasing an expensive PC and the so-called returning gamers in their 30s and 40s who used to play games but have run out of time to play once they have started a family,” said a spokesperson for LG U+. “The current policy doesn’t allow people under the age of 19 to sign up for the service.”

From early next month through the end of October, LG U+ will offer free trials of GeForce Now to its 5G users that subscribe to a monthly payment plan that costs more than 95,000 won ($85). Others can try the service at some 100 directly-managed LG U+ stores nationwide.

The service is based on 5G, but the telecommunications company plans to run the service on LTE and Wifi in some regions.

LG U+ said it hasn’t yet decided on an official launch date or the monthly price for the cloud game service.