The KT Wiz may have returned to the KBO this year with almost the exact same roster as last season, but they’ve played like a completely different team. 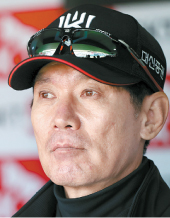 Behind that transformation is Lee Kang-chul, the Wiz’s new manager.

Having recently finished a two-game series against the NC Dinos with a win and a loss, the Wiz have held onto their spot at sixth in the league with 60 wins, 61 losses and two draws as of Wednesday’s game.

Although the year is far from over, Wednesday’s 8-2 win against the Dinos allowed the Wiz to set a new club record - the most number of wins in a single season in its history.

The Wiz is the KBO’s youngest team, having joined the league in 2015, and Lee is even younger when it comes to his management career. At 53 years old, this is Lee’s first season in charge of a team. Throughout his coaching career, he’s often found himself working with managers younger than him.

“I don’t have pride,” Lee said. “If something doesn’t work, we need to make changes quickly.”

Although it took him longer to take the helm of his own team, Lee never complained as he watched players that had looked up to him as a senior on the field slowly overtake him in the coaching ranks. Instead, Lee thinks it helped him become a better manager.

“I had very strong pride when I was a player,” Lee said. “But leaders should not be stubborn. If my team can get better once I accept my mistakes, then I have to do everything I can.”

Lee’s acceptance of that philosophy was tested at the beginning of the season. When he was first appointed as manager, he switched some of the infielders’ positions but had to switch them back only two weeks after the season kicked off.

“When I saw KT from the outside, it was a team with great offensive skills,” Lee said. “Once I became the manager, I assigned third baseman Hwang Jae-gyun to shortstop and Yoon Suk-min as third baseman. It was done to strengthen the offense, but the result came out differently than I expected. I accepted my mistake.”

Due to this, Lee came up with a more defensive lineup by assigning Hwang back at third base and assigning Shim Woo-jun to shortstop. The decision had to be made as the slugger wasn’t able to produce as many home runs compared to previous seasons due to the new baseball. But Lee’s decision to come up with a more defensive lineup wasn’t too difficult as he was quick to develop the team’s younger pitchers.

“I didn’t just change the positions,” Lee said. “First, I trusted my batters. Then, I started requesting more strategy. Once we start to succeed in our strategies and win more, our players started to gain more confidence.”

Looking at Lee’s career as a professional player, he was one of the best submarine pitchers in Korea. Throughout Lee’s 16-year career, he picked up 152 wins, 53 save and 33 holds with a 3.29 ERA.

Then, after retiring in 2005, Lee started his coaching career in 2006 as a pitching coach. After spending seven seasons with the Tigers, Lee joined the Nexen Heroes, now the Kiwoom Heores, as head coach. At the time, Youm Kyoung-youb, now the SK Wyverns manager, was the Heroes’ manager, and Youm was younger than Lee.

“I heard a lot of stories from the batting coach and defensive coach while at Nexen,” Lee said. “It was an opportunity for me to see baseball from a different perspective. It’s different for managers to pretend to not know and to actually not know what coaches say.”

After four seasons with the Heroes, Lee joined the Bears as pitching coach. Once again, he had to work for a manager younger than him, Kim Tae-hyung.

“By working for managers younger than me, I got to experience many things,” Lee said. “I need to be softer and let myself communicate with younger players.”

Regardless of whether the Wiz advances to the postseason or not, under Lee, the 2019 season is still a successful one for the Suwon club. They’ve found young starters like Kim Min, Bae Je-seong and Kim Min-su. As well as starters, they’ve also locked in strong closers - Kim Jae-yoon and Rhee Dae-eun - in addition to bullpen pitchers Ju Kwon and Jung Sung-gon.

Interestingly, the majority of the players saw improvement by switching their positions this season. Lee helped the young pitchers find positions that suit them and in the process, Lee provided detailed data to emphasize the importance of their new position to each player.

They also strengthened their fielders. When Hwang and Kang Baek-ho left the entry due to injuries last month, the Wiz successfully filled their spots with Park Seung-wook and Cho Young-ho.

“Since we’re a young team, we need to mobilize the players from the Futures League, in addition to the 26 players in the starting entry,” Lee said. “To prevent the young players from feeling pressure, we’re trying to make a team atmosphere where they can feel that even if they make a mistake, their teammates will make up for it.”

With the development of so many young players, the veterans may be starting to feel insecure about their positions.

“I wait as long as possible and make my decision when everyone accepts it,” Lee said. “If that process is reasonable, the team stays strong.”