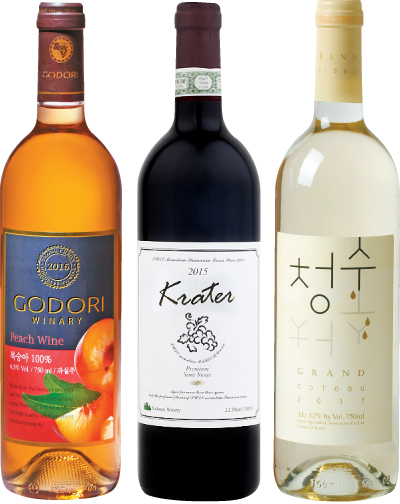 Luxury hotels in Seoul have started to offer alcoholic drinks made in Korea as a way to introduce local variations of familiar favorites. Until recently, buffet restaurants or other eateries that serve Western-style food at hotels typically paired their dishes with wine from overseas, but things are changing as wine menus are starting to more prominently feature so-called Korean wines for diners looking to try something new.

JW Marriott Seoul in southern Seoul’s Seocho District, which was entirely renovated last year, alongside The Plaza hotel in central Seoul’s Jung District, which recently welcomed four new restaurants and bars, are two of the leaders driving interest in Korean wine at luxury hotels. Some distilled drinks called soju - quite different from the diluted alcohol sold in the iconic green bottles - as well as makgeolli or yakju, made using rice fermentation, are what come to mind for many when talking about alcoholic drinks made in Korea, but industry experts are trying to expand that list. Korean wine doesn’t necessarily means drinks made of grapes. The definition of wine is used more extensively to include alcoholic drinks made of a variety of fruits, including apple, peach or plum.

Sommelier Lucas Jung, who just joined the JW Marriott Seoul’s buffet restaurant Flavors, promotes Korean wine not only because it is new, but it has also greatly improved from about 10 years ago when he first tasted wine made in Korea.

“As someone who has tasted and kept up with the changes and updates in the Korean wine scene for a long time, I think it is time for the greater public to get to know what Korean wines are like,” said Jung.

“If you were to compare Korea-made wines to those made overseas, there might still be some differences, but experiencing the wine style developed in Korea is something entertaining not only for wine drinkers but also those who are looking for items they want to experience before anybody else does.”

Jung offers three wines - one white, one rose, and one red wine - by the glass, with prices ranging from 15,000 won ($12.33) to 20,000 won. The wine list offers bottles of wines made with grapes or apples ranging from 70,000 won to 100,000 won. Some are sweet while others are bone-dry. To help expose more people to the world of Korean wines, the buffet restaurant offers a free tasting of Korean wines to guests every Thursday during dinner. Jung also hosts, in accordance with other Korean wine experts and makers, seminars for other sommeliers who want to check whether they can use more varieties at their restaurants and bars.

Forget Chardonnay for a second and try some Cheongsu. While Chardonnay or Sauvignon blanc are some of the most well-known grape varieties used to make wine in countries that have more established wine-making culture, Korea has been developing its own variety called Cheongsu. Local winemakers make these sweet wines to appeal to those who feel more comfortable drinking refreshingly sweet wine, while others make varieties for those who prefer non-sweet styles as well. Grand Coteau’s wines have become popular thanks to its availability on the Kakao Gift platform. Many others are also available on the mobile messenger’s platform in order to make it easier for local consumers to buy bottles for themselves to enjoy. 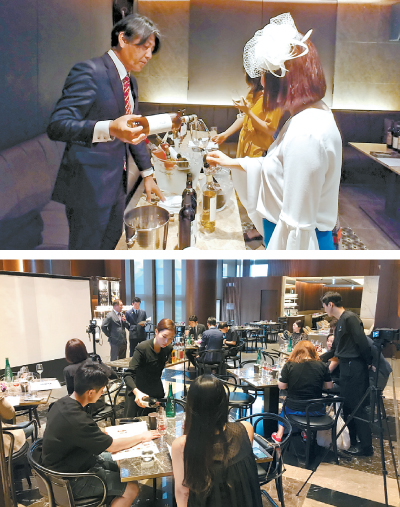 Top: Visitors to the opening party of The Plaza hotel in central Seoul, try out Korean wines. Above: Local sommeliers who are more familiar with wines made overseas attend a tasting seminar at the JW Marriott Seoul in southern Seoul. [URBAN DELIGHT, DAEDONGYEOJUDO]

“Since the name ‘wine’ is something that many people are familiar with, the term has been used to indicate fermented fruit drinks in Korea,” said Lee Ji-min, a CEO of Daedongyeojudo, a company that promotes all kinds of locally-made alcoholic beverages. She adds that it may be fun to have your favorite fruit in a different form like wine, and suggests that customers be open-minded rather than trying to applying the same standards they would for classic wines from overseas.

“Making wine is one way to make the most out of harvested fruits because many are left over just because they look ugly or are not suitable for commercial sales as a whole fruit,” she added. “It is one way to enjoy the fruit for a longer time because wine can last much longer than the fresh fruits.”

The Plaza hotel’s new bar Le Cabaret Cite introduced more than a dozen Korean wines at its opening party last month. All kinds of white, rose, red and sparkling wine were laid out on the table so that visitors could try a different taste of Korean drinks. With many sharing their experiences of drinking Korean wines, staff at other hotels have said that they are also eyeing the emerging trend and looking for ways that they can make their own wines to provide a fun and new dining experience to diners.