Park Byung-ho of the Kiwoom Heroes may have struggled at the beginning of this season, but a solid performance in August allowed him to quickly get back on track. 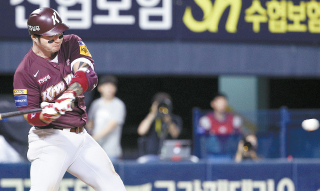 Park Byung-ho of the Kiwoom Heroes hits a two-run home run during a game against the Doosan Bears at Jamsil Baseball Stadium in southern Seoul on Tuesday. [NEWS1]

From the start to the middle of the season, Park was in a slump. With poor performance and a wrist injury in May and July, Park was sent to the Futures League for about a month, a surprise decision. Being sent down to the Futures League for a player of Park’s standing could be embarrassing, but he fought through to finally return in August as one of the KBO’s top sluggers.

Not only did Park hit four home runs in a game against the Hanwha Eagles on Aug. 27, but with another home run against the Doosan Bears on Tuesday, Park reached 30 for the season.

Park has now hit 30 home runs or more per season for six straight years in the KBO, only the second player ever to do so. Before Park, former Samsung Lions player Lee Seung-yuop was the only player to achieve the record. Now that Park tied Lee’s record, he is a step closer to making history, as he is still an active player in the KBO.

By hitting 11 home runs in August, Park’s also added 27 RBIs to his scorecard, good enough to top the monthly ranking in both categories. Park’s performance was also good enough to make him the KBO leader in home runs. As of Thursday’s game, Park leads the KBO in home runs at 30, a good three ahead of his teammate Jerry Sands.

Q. You’ve already hit 30 home runs for a sixth consecutive season in the KBO. How do you feel?

A. Normally, I don’t give a lot of thought to records. But when I heard that I’m only the second player in Korea to achieve this, I admit I was proud of myself. I think it’ll be a record that I’ll be proud of in the future. Thirty home runs is a good number, but I think it was even better that I hit my 30th home run when our team really needed it. I was relieved that it helped the team win.

You hit 11 home runs in August. Your performance that month was completely different from the struggles at the start of the season. What changed?

I played really badly before. I was fortunate to play a little better in August. In addition to myself, my team is also happy that we played well over the month.

I’m sure you are feeling better that you’ve been hitting home runs when your team is competing for a ranking spot in the regular season standing. How do you feel?

Even if I’m not the one to hit it, a home run can change the entire atmosphere of the game. Considering that, I think it’s a great thing that I’ve hit a lot of home runs during this important time.

You’re playing through the season with a wrist injury. How’s that feeling?

It’s true that my wrist isn’t doing well. But it’s not like I have to miss games. I’ve been getting treatments and taking care of it as I play. I’m going to play through the season by taking good care of it.

It looks like you’ve had a lot of ups and downs this season. Now that you look back at it, how do you feel?

When I look at this season, I think there were some areas that I had a tough time in compared to previous seasons. But I think I need to accept it because this is something a player will experience at least once during their career. It was an opportunity to look back at myself as a professional player. Since I’ve never played this badly during my time wearing the Heroes uniform, I don’t think I’ve controlled my emotions and other difficulties well. It was a year that taught me how to fight through those struggles.

A lot of sluggers are struggling with the new baseball this season, but it seems like you’re an exception?

I’m not an exception.

It does feel like the number of home runs has decreased compared to previous years. A really good hit still goes over the fence, but the hits that aren’t that good but would sometimes leave the park are not happening anymore.

Until mid-season, the hits that I thought might go over weren’t, so I started to add strength, trying to hit harder. But toward the end, I let go of those thoughts. I think letting go helps sluggers make bigger hits.

The Heroes are currently competing for second place against the Doosan Bears. How are you guys handling it?

We’re still in third, and we’ll have to see the results of the remaining games. But if we keep on winning more and more games, I think anything can happen in the ranking. Not only in games against Doosan, but we’ll have to try to stack up as many wins as possible in other games so we can have a chance at a turnaround. Our players, including myself, are trying to play one game at a time without getting stressed or thinking too much about Doosan.