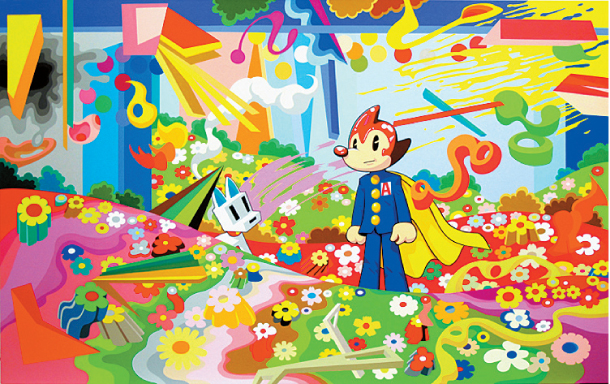 Lee Dongi’s solo retrospective exhibition “Lee Dongi, 1993 ~ 2014 : Back to the Future,” which began on Thursday at Pibi Gallery in central Seoul, features some of Lee’s best works from 1993 to 2014, including “Flower Garden” (2010), pictured above. The retrospective features 36 paintings from Lee’s archive - from his early cartoon-like pop art pieces such as “Ddang!” (1996), paintings using images from everyday life such as “Check” (2002) and “Instant Noodle” (2005) to his famed Atomaus series - giving an overall look at his career as one of the earliest pop artists in Korea. Lee’s works question how the popular images from people’s everyday lives affect their thinking and ultimately society. Pibi Gallery introduced Lee’s recent works through a solo exhibition from last year titled “Lee Dongi: 2015 ? 2018” and took a chance to look at the works that led him to where he is now. Lee was born in Seoul in 1967 and rose to stardom with his cute mouse-like character Atomaus - a fusion of the Japanese character Atom and the U.S. character Mickey Mouse - in 1993 and shaped the contemporary art scene by suggesting a new style of pop art different from the mainstream style found in the West. The gallery plans to publish an in-depth book about Lee to explain his artistic vision, as well as on other artists in the future. Lee’s book is set to come out before the end of 2019. [PIBI GALLERY]