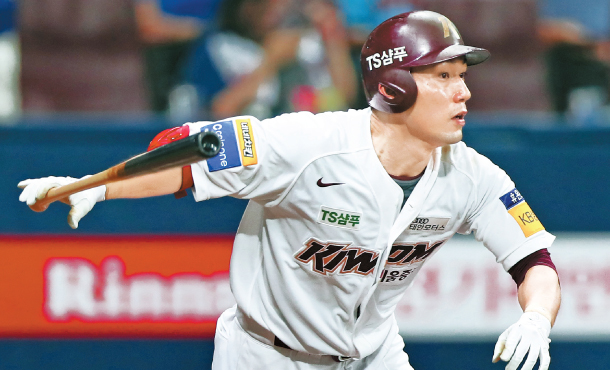 Seo Geon-chang watches his hit during a game against the Samsung Lions at Gocheok Sky Dome in western Seoul on Friday. [YONHAP]

This season, it’s not only the race for second base that sees the Doosan Bears facing off against the Kiwoom Heroes. When it comes to hits, Lee Jung-hoo of the Heroes and Jose Fernandez of the Bears are also competing for the title.

As of Tuesday 6 p.m., Lee leads the category at 180, while Fernandez is runner-up at 175. Since both clubs have less than 20 games remaining until the end of the season, it is unlikely that the winner will reach 200 hits this season.

While Lee currently leads in hits, his teammate Seo Geon-chang has also been receiving a lot of attention recently. Seo is the only player in the KBO ever to have recorded 200 hits in a single season, reaching the milestone back in 2014. Seo finished that season at 201 hits, which is actually a much more impressive achievement compared to today as in those days the league had only 128 games.

“I don’t care [about my record getting broken],” Seo said. “It only gets better if there are better records. I’m learning as I watch the two players bat.”

That hits record may make Seo a household name today, but his career didn’t start in such a promising way. Seo first joined the professional league as an LG Twins’ development player in 2008, but was released by the club after a year.

After fulfilling his mandatory military duty, Seo continued his baseball career by joining the Heroes in 2012 through their qualifying tryout. Seo got off to a great start in his rookie season in 2012, winning Rookie of the Year.

Continuing his success in 2014, Seo was named the KBO’s regular season MVP. During the 2014 season, Seo had a 0.370 batting average with 201 hits. From his outstanding consistency, the fans have given him the nickname, “teacher,” or “professor,” for his serious attitude at bats.

But right when he seemed to have reached the peak of his career, Seo was forced to drop out due to injury. In 2015, Seo injured his right ACL and last season, he got hit by a pitch on his right shin. Due to this, he only played in 37 games throughout the 2018 season.

This season, Seo had to miss more than a month as he injured a ligament in his left knee while sliding during a game against the Lotte Giants on June 21. Despite his absence, Seo didn’t let such injuries affect the rest of the season.

After missing the entire month of July, Seo returned to the Heroes on Aug. 1 and is finally back on form.

With Seo’s return, the Heroes’ batting lineup has also been reinforced, as it now goes Lee, Seo, Park Byung-ho and Jerry Sands. Park and Sands are currently in first and second place in the KBO’s home run ranking.

“It may be because I suffered from injuries regularly, but from that, I got to strengthen my mental game,” Seo said. “Forty days of absence is nothing. Depending on the weather, my body condition differs. I’m relieved that we’re at Gocheok Sky Dome, where we don’t get affected by the weather. I’m continuing to make changes to my batting form. It may be hard to tell but I keep on thinking of ways to make it better.”

Although Seo keeps on battling his injuries, on the field, he is clearly not afraid. In addition to his performance at bat, this season, Seo already has 15 stolen bases. Seo now has a shot at reaching 20 stolen bases this season for the first time since 2016, when he stole 26.

Last season, Seo was assigned as designated hitter most of the year, but this season he is able to once again join the defense. He has played 61 out of 103 games as second baseman.

“It helps me keep up with my rhythm when I also play defense,” Seo said.

Since the Heroes joined the KBO in 2008, they’ve advanced to the postseason five times but never won the Korean Series. Their best finish was as runner-up in 2014. Last season, they were eliminated in the very last game of the playoff series by the SK Wyverns.

Seo was with the team for all five of those postseason appearances.

“Our fans encouraged us by saying we were amazing or we fought well despite the loss, but our players felt differently,” Seo said. “Losing always brings its regrets and angers us. We’ve put aside the past and are preparing better than ever to avoid making the same mistakes.”