The future is female for Korean musicals: Classics are being adapted to reinvent the leading lady roles

The future is female for Korean musicals: Classics are being adapted to reinvent the leading lady roles

With little power and lacking dialogue, female characters in local musicals could only be described as flat, passive and secondary characters compared to the complex male protagonists they share the stage with.

But the damsel in distress role seems to be a thing of the past as female characters are not only making their voices heard, but wielding weapons too.

These changes are particularly visible in the character Roxanne from the recently opened musical “Cyrano.” When the musical premiered in Seoul two years ago, Roxanne was portrayed as a princess-type character, adored by many men for her childlike smile. She was a stereotypical female character who snuck onto the battlefield by hiding under someone’s wagon.

But in the 2019 version of the show, Roxanne, wearing pants and knee-high boots under her flouncy dress, points a sword at the man she is betrothed to as part of an arranged marriage. She also enters into the enemy camp disguised as an old man and encourages dispirited soldiers. 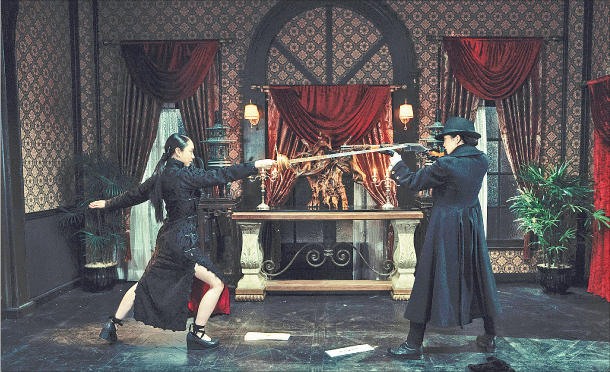 Director of “Cyranao” Kim Dong-yeon said, “We had this intention to interpret Roxanne in a modern way. We wanted her to be independent, make decisions by herself and stand against the world. When she shows such sides, we thought we could make the audience understand the lifelong love Cyrano has for Roxanne.”

The musical “Excalibur” which is based on the story of King Arthur and ran until the end of August, reinvented the story’s heroine Guinevere.

Guinevere is a typical noblewoman in the original story, but she is reincarnated as an independent woman, dominating the stage.

Arthur becomes a king after pulling out the legendary sword Excalibur from a stone. The first question Guinevere asks him is “Do you respect women?” She also gathers all the women in the town and educates them on how to use swords. Her heart-aching romance with Lancelot blossoms as the two swing wooden swords at each other. 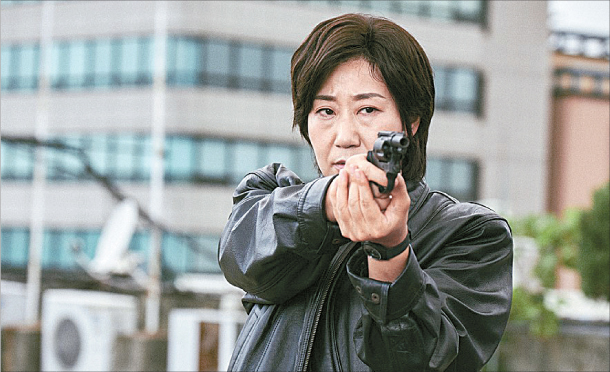 Actress Ra Mi-ran stars in the 2018 film “Miss and Mrs. Cops,” which was well received for creating a new type of female hero. [CJ ENM, TVN]

Strong female characters steal the limelight in the musical “City of Angels,” which premiered on home soil in early August.

The story revolves around an indecisive screenwriter who is bossed around by production companies, but his streetwise girlfriend changes him for the better. His girlfriend tells him, “All of your writing is trash. Don’t mind what others say. Rewrite all of it.”

“City of Angels” is a Broadway licensed production, but a shooting spree scene involving the leading female character can only be seen in the Korean version directed by Oh Gyeong-taek.

“I wanted to give charismatic sides to the character so that she can punish a man who keeps telling her lies and cheating on her,” said Oh.

Stronger and more independent female characters are also becoming more prominent in drama series and films, an example of which is this year’s film “Aladdin.”

Disney’s live-action film based on the animated feature film with the same title attracted 1.2 million moviegoers and became the highest-grossing film in the first half of this year.

In the original film, which came out in 1992, Jasmine, the princess, is depicted as a young woman who is bored with her life inside the kingdom. But in the 2019 version of the story, Jasmine declares that she will become the sultan herself.

“Speechless,” the solo song of Jasmine, has become the signature scene of the live-action “Aladdin,” surpassing the popularity of “A Whole New World” from the original version.

Bo Peep, a porcelain toy from this year’s “Toy Story 4,” comes back with a bigger than ever presence in the fourth installation of the film franchise.

Bo Peep was a flat, supporting character who was nothing but a love interest of Woody, but she returns as a female warrior similar to Furiosa from the “Mad Max” series.

Bo Peep leaves her human owner and tries to find meaning in her own life. She even leads Woody in some scenes, telling him to follow her directions.

When talking about the ongoing trend of strong female characters, Captain Marvel can’t be omitted. Marvel Studio head Kevin Feige introduced the female Captain Marvel as “the most powerful character in the Marvel Cinematic Universe.”

Korea’s film and drama industry, heavily dominated by male characters, is finally seeing a lot more strong and self-reliant female characters, for example the 2018 film “Miss and Mrs. Cops” which was well received for having female heroes who pair up to crack down on digital sex crimes that are not often taken seriously in society.

Go Ae-shin from the period drama series “Mr. Sunshine” (2018) is a noble lady in the upper class, but she learns how to use rifles in order to protect her country from Japan and later leads independent movements.

The more recent drama series “Search: WWW” also challenged gender stereotypes. Set in highly competitive web portal companies, the drama series has three female characters in their late 30s who are all goal-driven and who compete against one another but without deceiving each other.

But compared to drama series and films, musicals still have a long way to go.

Musicals are highly dependent on well-known classics, which makes it hard for them to add changes to female characters.

Good-looking male characters often dominate the stage, as that is what is believed to attract audiences for musicals in Korea, which are predominately made up of women in their 20s and 30s.

But with the rise of the Me Too movement and more light being shed on gender issues in recent years, many audiences feel female fictional characters on the stage do not represent reality well.

According to a survey conducted in March 2017 by The Musical, a monthly magazine dedicated to the genre of the performance, 88 percent of survey respondents said that they had at one time felt uncomfortable with passive female characters.

With growing awareness of gender equality issues, the musical industry is beginning to take note of the way audiences feel toward female characters.

Musical “Red Book,” set in the 19th-century Victorian era, received acclaimed reviews for the story arc of the female protagonist when it premiered in 2017.

It is the story of a female author who writes about her own sexual experiences and fantasies.

Since then, more original Korean musicals have been staged with empowered female characters at the center such as “Marie Curie,” “Shinheung Military Academy” and “Hope.”

Licensed musicals that are based on original stories such as “Cyrano” and “Excalibur” attempt to add changes to their female characters that do not affect the main flow of the story.

Experts say those changes may look superficial, but such an attempt is an early step to develop more complicated female characters.

“Just having swords in hand doesn’t make women characters more diverse or move ahead. There is this fixed idea about women that they should be seen as good and righteous. Such thoughts make them flat and stereotyped. Now it is time for us to think about what narratives are really needed for female characters,” Lee added.

An official from Seensee Company, the Korean production company of “Mama Mia!” said, “The story about independent middle-aged women was created by three women of the same age.”

Lee the critic said, “Women have come so far compared to the past by climbing up the social ladder, but still, a lot of musicals have men at the forefront. Maybe because of this, more female audience members can relate to ‘Mama Mia!’”

On Broadway, where the mainstream audience is mainly comprised of women in their 40s and 50s, musicals with more diverse female narratives for various ages are available.

Musical “Fun Home,” which follows the journey of a female protagonist discovering her sexuality, won the Tony Award for best musical in 2015.

The U.S. musical industry also rolls up its sleeves and reinvents old stories. A female character who was once negatively portrayed in the old version of the musical “Oklahoma!” is now seen as a woman who knows what she wants and who can openly talk about her desires in the new version that is currently playing.

“Nobody expected a musical like ‘Fun Home’ would make it big on Broadway a few years ago. The success of ‘Fun Home’ implies a lot,” said Lee.

“We have many musicals and films with female protagonists, but without deep discussion on them, the characters will be static. We need to talk more about how to make them come alive. Without it, [musicals and films having female characters as leads] could be another passing trend,” Lee added.