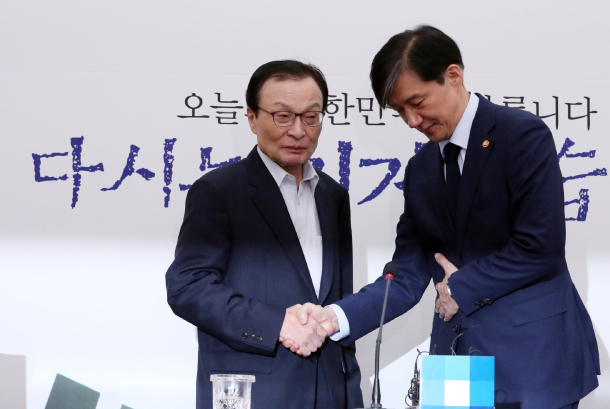 Justice Minister Cho Kuk’s daughter did take credit for a controversial medical research paper in her application to Korea University in 2010, the JoongAng Ilbo reported Tuesday - which Cho himself denied in his confirmation hearing on Sept. 6.

The research paper from Dankook University’s Medical Science Research Institute credited Cho’s daughter as first author even though she was just a high school intern.

“During a raid of Korea University, the prosecution seized records concerning the 2010 admission process, including a list of materials that Cho’s daughter had submitted as a part of her application,” a university official told the JoongAng Ilbo.

Although the application itself and other submitted materials were discarded because the five-year mandatory archive period had passed, the list of materials she submitted remained, the official said.

The official said he was questioned by the prosecution on Monday as a witness in an ongoing probe into possible admissions fraud by Cho’s daughter.

On Monday, the Seoul Central District Prosecutors’ Office questioned a professor and admissions office workers who handled the process in 2010, including the university official. Cho’s daughter was also questioned the same day.

According to the university official, a list showed that Cho’s daughter made 12 submissions with her application. “We confirmed that the research paper from Dankook University’s Medical Science Research Institute, which recently stirred controversy, was registered as the ninth item on the list,” he said.

“Because it is rare for a high school student to publish a medical research paper, it must have contributed substantially to her acceptance,” he said.

Following the internship, she was credited as the first author of a medical research paper submitted to the Korean Society of Pathologists in 2008 and published in the society’s journal in March 2009.

The paper incorrectly identified her as a researcher at the institute, not a high school intern.

The Korea University official’s remarks indicate that Cho lied about his daughter’s undergraduate admission. During an 11-hour press conference on Sept. 2 and a National Assembly confirmation hearing on Sept. 6, Cho said that his daughter had not submitted the research paper as part of her application.

“At the time, Korea University selected students based on their language abilities, and the controversial paper was not submitted,” Cho said during the press conference.

The prosecution summoned Cho’s daughter on Monday and questioned her about a series of dubious academic claims. In addition to the research paper, she was questioned about a suspicion that she used fake documents in her application to Pusan National University’s (PNU) medical school in 2015. The 28-year-daughter is currently a student there.

She is suspected of having lied about an internship at the Korea Institute of Science and Technology (KIST). Although she said she worked at KIST for three weeks as an intern, the internship period overlapped with her alleged medical volunteer work in Kenya. The entry logs for KIST also showed that she only entered the building for three days.

“She went to Kenya during the KIST internship after seeking permission from the responsible official through email,” Cho said during the confirmation hearing. He also said she had entered the building with other people without using her own ID card.

Prosecutors also questioned her about an allegation that her mother had faked an academic award from Dongyang University, which she included as part of her medical school application.

Cho’s wife Chung Kyung-sim is a professor at Dongyang University. Chung was indicted on Sept. 6 on a forgery charge, and the first hearing in her trial will begin next month.

According to Chung’s indictment, she is accused of having fabricated the award and placing on it a seal of the university president in cooperation with a co-conspirator. The JoongAng Ilbo obtained the indictment from the National Assembly.

The prosecution said Chung and her unidentified accomplice conspired and created the award on Sept. 7, 2012. Chung allegedly placed the university president’s seal on the fake award on the same day.

After the JoongAng Ilbo first reported on Sept. 4 about a suspicion that the award was a fake, Chung made 13 attempts to telephone Choi Sung-hae, Dongyang University’s president, over two days. Her husband Cho was put on the phone, fueling speculation that they were trying to pressure Choi to lie.

During the Moon Jae-in administration, indictments of former judges prosecuted for having abused judicial power, such as former Supreme Court Chief Justice Yang Sung-tae, were submitted to the National Assembly through the Justice Ministry. The indictment of former President Lee Myung-bak, prosecuted on charges of bribery, was also made public using the same process.

It normally takes hours or a day for the ministry to share the indictment with the National Assembly upon receiving it from the Supreme Prosecutors’ Office. This time, the ministry took six days to submit Chung’s indictment paper to the legislature.

According to the prosecution, it will soon summon Chung for questioning on additional admissions fraud charges. As the probe into Cho’s daughter’s admissions scandal intensifies, university students continued to demand that her admissions - and degrees earned - be canceled. Students of Korea University and Yonsei University have scheduled demonstrations for tomorrow, and students of Seoul National University (SNU) have agreed to join the protest.

The admissions office of Korea University earlier said it will cancel Cho’s daughter’s admission if a critical flaw in her application was proven. It said it will wait for the results of the prosecution’s probe to make a conclusion.

If Cho’s daughter’s Korea University admission is canceled, her admission to PNU medical school will also be voided. An undergraduate degree is a prerequisite for medical school.

Students said their protests will not be organized by their respective student councils. They said the protests will also be free from political partisanship.

“Cho’s hypocrisy and misconduct were revealed so many times, but President Moon Jae-in went ahead and appointed him as justice minister,” a student who is organizing the SNU protest said. “It is our position that Moon is also responsible and deserves criticism. Our criticisms of Cho and Moon are not meant to defend any political faction.”

The group was launched shortly after Cho, a professor of law at SNU, was formally appointed as minister. According to the group, dozens of SNU professors have signed the petition.

It will hold a press conference in front of the Blue House tomorrow and demand Cho’s dismissal. A similar signature drive took place in November 2016, demanding former President Park Geun-hye’s resignation over her alleged abuse of power. At the time, 2,234 professors participated. The main opposition Liberty Korea Party (LKP) said Tuesday that Cho must be held accountable for having lied during his confirmation hearing, but it is impossible to criminally punish Cho for the suspected perjury. According to the law governing testimony in the National Assembly, a perjury charge can only be applied to a witness, not the subject of a confirmation hearing.