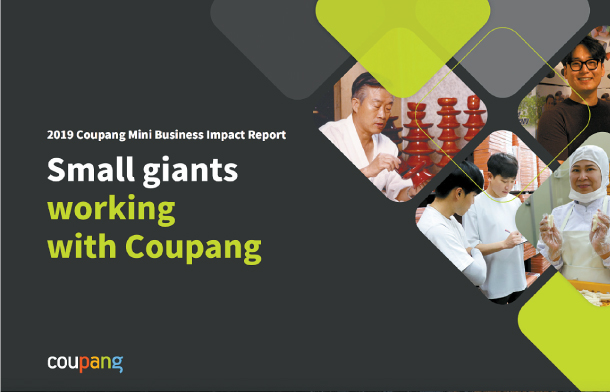 A report published by e-commerce giant Coupang and KPMG Samjong Accounting Corp. highlights the success of “mini businesses,” especially outside of Seoul. [COUPANG]

Coupang has collaborated with KPMG Samjong Accounting Corp. to publish the nation’s first report on the socioeconomic values of the company’s partner businesses, referred to as “mini businesses,” with annual revenues of 3 billion won ($2.5 million) or less.

According to the report, every year, more than 10,000 domestic SMEs join Coupang and see a 81 percent growth rate, surpassing Coupang and the Korean e-commerce market’s growth rate, which stand at 61 percent and 18 percent respectively.

The report showed that small- and medium-sized enterprises (SMEs) have contributed largely to regions outside of Seoul, as 60 percent of these businesses are based outside of the metropolitan area and grew three times faster than their counterparts in Seoul.

A mini business in Hoengseong, Gangwon expanded 30 times faster compared to a counterpart in Seoul while partnering companies based in Sejong offered three times the number of products than the national average.

The growth of these mini businesses has also led to a huge boost in job creation. The report claimed that more than 320,000 jobs were created by mini businesses last year, which exceeds the total jobs created by Korea’s top 10 conglomerates in the second half of 2018.

“Coupang’s sales platform provides a great customer experience which creates room for business growth for its partners. This in turn enables Coupang to grow into a more inclusive and innovative company,” said an official from KPMG.