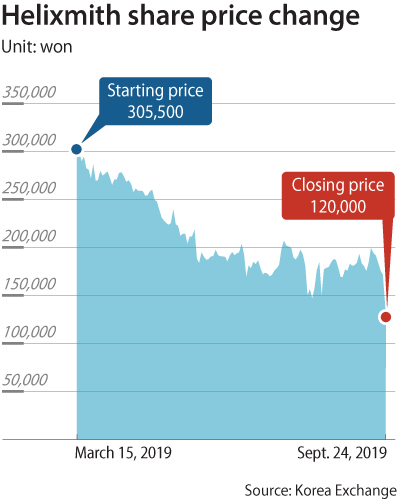 Korean biotech has been hit again as one of its best-known and longest-listed companies reported that data from a major clinical trial is worthless.

It is the fifth major negative surprise in the sector in a year.

Helixmith announced during an emergency press conference Tuesday that data compiled from the initial stage of Phase 3 clinical trials in the United States for VM202-DPN are now useless. It turns out that some people in the control group received the treatment while some in the experimental group were given the placebo.

The company, formerly known as ViroMed, is the fifth largest in terms of market capitalization on the secondary Kosdaq.

It was listed in 2006 on the exchange and was the first to do so under a special technological exception.

The drug approval timeline for VM202-DPN is now pushed back a full year, and investor sentiment toward the Korean biotech industry has been severely tested yet again.

The efficacy data became statistically meaningless when, according to company analysis, 36 patients in the placebo group were found to carry VM202’s DNA, while 32 of those who were grouped to receive the gene therapy were found to carry suspiciously lower concentrations.

“I am truly sorry to deliver this news,” said Helixmith CEO Kim Sun-young. “We heard in the past that there were cases of placebos and drugs being mixed, but we never expected this to happen to us.”

VM202-DPN is a plasmid product with dual neurotrophic and angiogenic properties that alleviates diabetic nerve pain and helps those injected regenerate damaged nerve cells. The candidate gene therapy was regarded as a strong rival to Pfizer’s blockbuster drug Lyrica.

Kim suspects hospitals lacking the experience and capacity to carry out the trial were selected as the test group was expanded from 250 people in Phase 2 trial to 500 for in Phase 3. Helixmith ordered the clinical trial to be conducted in a double-blind method, where medical practitioners and patients being tested cannot know if they are given the placebo or VM202.

An outside biostatistics expert who analyzed the data for VM202 commented that it is “extremely difficult or even impossible” to derive any result on the efficacy of VM202 from the recent trial.

Kim remained hopeful and tried to appease angry shareholders during the conference by saying the mixed-up data still proved the safety of VM202, as only two of the patients exhibited adverse symptoms.

Due to the late-stage flop, Helixmith pushed its original plan to submit an application for VM202 to the FDA by end of 2020 to February 2022. The company now expects to finish the Phase 3 clinical trial between late 2021 and early 2022.

The later trials will be conducted in smaller sizes and with better management, Kim added.

After the company admitted problems with the test data and announced it can no longer continue on its original timeline, Helixmith’s shares dropped the daily limit of 30 percent Tuesday to 120,000 won ($100.50). The company peaked at 305,500 won per share in March this year.

It lost 76.75 billion won in market capitalization in just one trading day after making the announcement.

The Helixmith disappointment is just the latest in a series in the biotech sector.

Early last month, SillaJen halted clinical trials for its Pexa-Vec liver cancer therapy after it was told by an independent data monitoring committee that the treatment does not seem to work.

Invossa, a gene therapy drug for knee osteoarthritis from Kolon Life Science, was found in April to contain a different cell line from that approved for sale in Korea and for clinical trials in the United States.

The company’s request to resume trials in the United States was denied Monday.

The Korea Exchange’s health care index has fallen around 43 percent since Sept. 27, 2018 compared with a 10 percent drop in the Kospi.

Investors are now waiting for Samsung Bioepis to release the results of Phase 3 clinical trials for its Avastin biosimilar, a blockbuster drug from Roche for colorectal cancer, later this month.