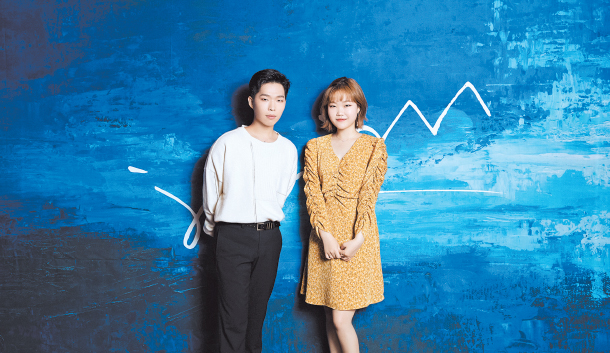 Lee Chan-hyuk and Lee Su-hyun of sibling duo AKMU pose ahead of a press conference for their new album “Sailing” - their first in two years. [YG ENTERTAINMENT]

Sibling duo AKMU is back after a two-year hiatus, but not exactly as you might remember them.

Lee Chan-hyuk, 23, and Lee Su-hyun, 20, now go by the name AKMU, rather than their original moniker Akdong Musician, which roughly translates to “joyful child musicians.” Their third full album “Sailing,” released Wednesday, takes a sharp turn from the bright and bubbly tones that characterized their earlier music.

The brother and sister duo are no longer the playful teenagers who viewers first met in 2013 through the audition program “K-Pop Star.” They’re both legally adults, and Chan-hyuk was discharged in May from the Marine Corps, where he conducted his mandatory military service.

With lyrics that discuss topics like freedom expressed through sentimental melodies and acoustic sounds, “Sailing” is an album that reflects the depth and maturity of the young musicians.

“With previous albums, I often made artistic compromises because Su-hyun’s bright character fit really well with AKMU’s image. But ‘Sailing’ shows off my personality,” Chan-hyuk explained during a press conference for “Sailing” held on Wednesday in southern Seoul.

Su-hyun agreed that with this album, she wanted to give her brother as much flexibility to create music in the style he wanted, knowing how few opportunities he had in the military.

“Among all our albums, this one focuses the most on my brother’s story. Over the past two years, I could quench some of my thirst for music through various channels, but my brother didn’t have that. As we continued to work on the album, however, the album became mine and AKMU’s as well,” said Su-hyun. 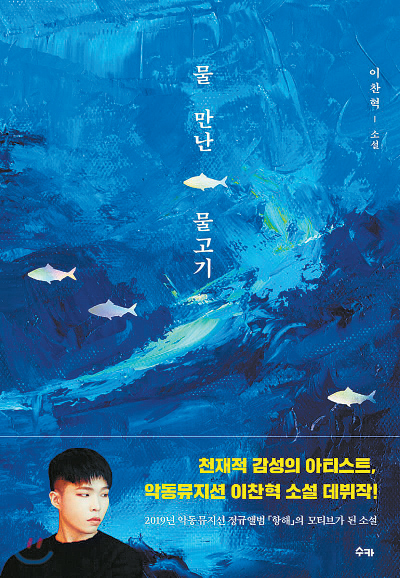 “Sailing” contains 10 songs written by Chan-hyuk, including the lead track “How Can I Love the Heartbreak, You’re the One I Love.” Many of the songs, like “Whale,” “Chantey” and “Fish in the Water,” relate to the ocean, where Chan-hyuk spent much of his time while serving in the Marines.

The tracks also discuss freedom, the environment and other philosophical subjects that are “not frequently discussed in [the] music industry,” Chan-hyuk said.

“In a way, going into the military was my first time experiencing things that were common for the average person. I had difficulties accepting and adjusting to some situations, but they made me think maturely.”

Given the restrictions on personal device usage in the Korean military, recording the songs was as much a difficult task as coming up with them.

“There wasn’t any way to record music on the ship,” Chan-hyuk said. “I just had my pen and notebook, and I tried really hard to not forget my songs.”

“My brother would perform the songs on a guitar through a common phone in the military, and I would record them on my side,” Su-hyun added.

Besides working on “Sailing,” one of Su-hyun’s major projects over the past two years was working on her first solo album, which, she admitted, turned out to be much more challenging than expected.

“I scrapped my solo album three times. We tried going for an acoustic style at first, and then a cool summer vibe for the second try, but I didn’t feel so certain about them. For the third try, we focused [on] a winter theme but I couldn’t find the message I wanted to send.”

Though the siblings looked sheepish while discussing it, they both acknowledged time apart helped them appreciate each other.

“The difficulties I faced while working on my solo album made me realize how hard Chan-hyuk must have worked for our previous albums,” Su-hyun said. “I sent emails and hand-written letters to him almost like an apology and promised him that when he came back I would become a better person. I think we went through a process that married couples usually experience,” she laughed.

“When I got Su-hyun’s letters, I came to respect her more as an artist because she acknowledged her difficulties,” Chan-hyuk agreed. “We barely discuss the content of those letters now, but we both remember the messages we shared with each other.”

Besides an album with a brand new sound, AKMU had another big surprise for fans this week. Today, Chan-hyuk’s debut novel “Fish in the Water” becomes available in bookstores. According to Chan-hyuk, the book is set in the same universe as “Sailing” and contains many direct references to the album. Lyrics appear throughout the story, and chapters take on names of the songs on “Sailing.”

“I wrote the book while other soldiers were sleeping at night,” explained Chan-hyuk. “I’m not a talented speaker, but I wanted to express my thoughts and values through music and writing.”

“I almost teared up in the end,” added Su-hyun, who had just finished reading the book. “When you hear songs from ‘Sailing’ after reading the book, you’ll be able to conjure up images that were depicted in ‘Fish in the Water.’”

AKMU is set to hold a free live concert this Sunday at 7:30 p.m. at an open stage in Yeouido Hangang Park in western Seoul and perform songs from their latest album.