It’s come down to one last outing. 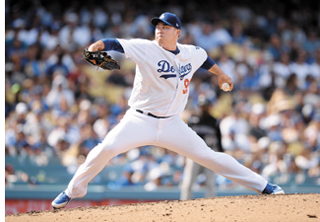 Ryu Hyun-jin of the Los Angeles Dodgers throws a pitch during a game against the Colorado Rockies at Dodger Stadium on Sept. 4. [REUTERS/YONHAP]

Los Angeles Dodgers’ left-hander Ryu Hyun-jin will make his final start of the regular season this weekend against the San Francisco Giants. The game will be at 1:05 p.m. Saturday at Oracle Park in San Francisco - that’s 5:05 a.m. Sunday in Seoul.

More importantly, Ryu will try to secure his first ERA title, which would also help his case for the National League (NL) Cy Young Award.

Ryu’s ERA is at 2.41, the lowest not just in the NL but in all of baseball. His closest pursuer in the NL is Jacob deGrom of the New York Mets, who threw seven shutout innings in his final regular season start on Wednesday to finish the season with a 2.43 ERA. Atlanta Braves’ Mike Soroka is third in the league with 2.60 with one start remaining, and even if he pitches a complete game shutout in his regular season finale, Soroka will finish with 2.47.

The American League (AL) leader, Gerrit Cole of the Houston Astros, has a 2.52 ERA and may or may not make another start on the final day of the regular season on Sunday.

No Korean pitcher has led his league or MLB in any major statistical category. Former Dodgers right-hander Park Chan-ho finished second in the NL in strikeouts with 217 in 2000, but he was 130 behind the leader, Randy Johnson of the Arizona Diamondbacks.

Ryu has been leading the ERA race for most of the season, and had it not been for his late-summer swoon, Ryu would be enjoying a comfortable lead now.

Ryu kept his ERA below 2.00 for three months, starting in mid-May. It reached a season-low 1.26 on June 16. Ryu was roughed up for seven earned runs in four innings against the Colorado Rockies on June 28 and saw his ERA rise to 1.83, but by the end of July, Ryu cut it down to 1.53.

After holding the Diamondbacks scoreless over seven innings on Aug. 11, Ryu ran into trouble over his next four starts, giving up 21 earned runs in 19 innings. His ERA ballooned to 2.45, and the dismal stretch has likely cost him a real shot at winning the Cy Young.

Ryu skipped a turn in the rotation to work on his mechanics and bounced back with back-to-back quality starts. He shut down the Mets for seven innings of two-hit ball on Sept. 14 and held the Rockies to three runs in seven innings last Sunday.

The best way for Ryu to clinch the ERA title would obviously be to keep the Giants off the board in however many innings he pitches.

If Ryu allows one run, he’ll still be in good shape as long as he throws more than 2 and two-thirds innings. But if the Giants score two, Ryu will have to go at least 6 and one-third innings to stay ahead of deGrom.

Giving up three or more runs will drop Ryu behind deGrom.

Even winning the ERA title is unlikely to make Ryu the first Asian-born Cy Young winner, though he will still garner some votes.

DeGrom, the 2018 winner, is ahead of Ryu in most standard and advanced categories, other than wins (13 to 11) and ERA. The Mets’ right-hander struck out 255 batters in 204 innings to lead the NL, while Ryu has a pedestrian 156 strikeouts in 175 and two-thirds innings. DeGrom is also tops in the NL in walks and hits per innings pitched (WHIP) with 0.97, while Ryu is in third at 1.02.

Once the Giants are out of the way, Ryu will shift his focus to the postseason and the Dodgers’ pursuit of their first World Series title since 1988.

The Washington Nationals have locked down one wild card, while the Milwaukee Brewers are holding down the second wild card spot while also trailing the St. Louis Cardinals for the NL Central title by just one game with three to play.

Ryu faced the Cardinals once and lasted just 1 and two-thirds innings on April 8 before leaving with a groin injury. He was charged with two earned runs in that outing.