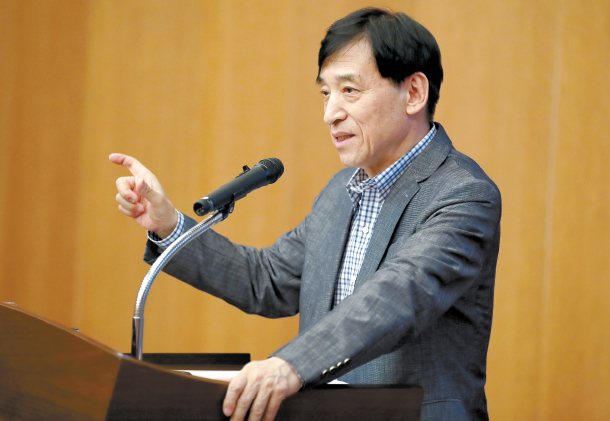 Bank of Korea Governor Lee Ju-yeol speaks to reporters at the central bank’s training center in Incheon on Friday. [BANK OF KOREA]

Bank of Korea Governor Lee Ju-yeol is the first government official of this administration to admit the economy may fail to even reach its forecast.

“It’s going be hard to reach 2.2 percent [for economic growth] for this year,” Governor Lee told reporters on Friday. “When looking at the last two months since July, downward risks have increased a bit more.”

Gov. Lee raised concerns over the continuing struggle in exports particularly contributed to by the lackluster semiconductor industry.

“The biggest reasons behind the low performance of exports are the semiconductor industry struggling to recover and the uncertainty over the trade conflict between the United States and China, which we do not know when will be resolved.”

He said the U.S.-China trade conflict is especially weighing on investment sentiment and weakening the global value chain.

“It’s difficult to say when the recovery momentum will happen,” Lee said.

Lee, however, did not specify a possible readjustment on the economic outlook, which will be released in November, adding that there are still many factors that need to be considered.

The central bank in July shaved off 0.3 percentage points from its earlier forecast of 2.5 percent made in April citing concerns of growing trade tensions between the United States and China.

Recently private think tanks have been lowering Korea’s economic growth outlook with some even projecting growth below 2 percent.

The Organisation for Economic Cooperation and Development earlier this month lowered Korea’s economic growth for this year by 0.3 percentage points its earlier forecast in May to 2.1 percent.

The Asian Development Bank last week projected Korea’s growth at 2.1 percent, down from July’s 2.4 percent, while Bank of America earlier this month lowered its growth from 1.9 percent to 1.8 percent citing struggling exports and slowing investment in the private sector.

And it’s not just foreign institutions that are lowering their growth estimates for Korea. The Korea Economic Research Institute earlier this month lowered its outlook from 2.2 percent to 1.9 percent.

The Finance Ministry also readjusted its outlook in July from 2.6 to 2.7 percent to 2.4 to 2.5 percent growth.

The central bank’s governor also projected that inflation for this month will be flat as it was in August.

However, he downplayed concerns over deflation.

“Although the consumer price index for the next two months will decline, it will be only be temporary,” Lee said. “By the end of the year or early next year it will rise around 1 percent,” he said. “While expected inflation is falling, when looking at the signs specifically, it’s difficult to interpret it as deflation, yet.”

There is growing consensus that the central bank will likely lower the key interest rate one more time before the end of the year.

“Considering external conditions and the uncertainty over growth and inflation, we will manage [an accommodative] monetary policy,” Lee said.

When asked of the possibility of a rate cut in its meeting next month, Lee simply said the central bank will make its judgment accordingly.