The LG Twins will progress to the first round of the 2019 KBO playoffs after beating the NC Dinos 3-1 in the Wildcard game at Jamsil Baseball Stadium in southern Seoul on Thursday. 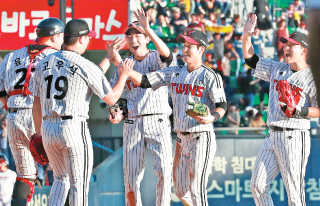 The LG Twins celebrate after winning the Wildcard game against the NC Dinos at Jamsil Baseball Stadium in southern Seoul on Thursday. [YONHAP]

The NC Dinos are now out of the tournament.

The Twins started strong, picking up a run at the bottom of the first inning when an RBI single from Lee Hyung-jong brought Lee Chun-woong home to give the team an early 1-0 lead.

Things were quiet until the fourth, when the Twins added on to their lead.

Once again it was Lee Hyung-jong who brought Lee Chun-woong home, this time with an RBI double. A sacrifice fly from Park Yong-taik then brought Gu Bon-hyeok home to take the score to 3-0.

The Dinos responded immediately with a one-run homer from No Jin-hyuk at the top of the fifth to take the score to 3-1.

Despite a one-out, bases loaded situation at the top of the ninth, the Dinos weren’t able to make up for the deficit and the game ended with the Twins progressing to the first round of the playoffs.

As the fifth-place finisher in the regular season, the Dinos always faced an uphill struggle. The KBO Wildcard is weighted to favor the fourth-place team - the Twins - who enter the two-game series with a one game advantage, meaning they only need a tie to advance.

No fifth-place team has ever won the Wildcard series to advance to the first round of playoffs. The Kia Tigers, in 2016, are the only team to ever make it into the second Wildcard game.