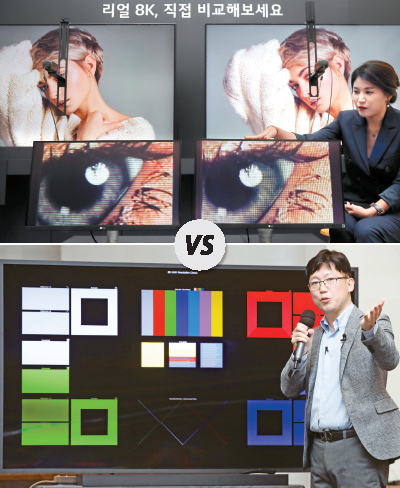 Korea’s two leading appliance makers are at war once again, this time over 8K televisions.

The battle started at the IFA 2019 Berlin trade show that took place in September, when LG Electronics lashed out at Samsung Electronics’ QLED 8K TV, saying it wasn’t really 8K.

Since then, the two have held a series of press conferences bashing each other’s TVs in a race to prove that not only are both of their TVs definitely 8K, but also superior to each other.

The dispute comes as Samsung and LG are vying to emphasize how much better their technology is than cheaper, government-backed Chinese LCD TV manufacturers, who are rapidly emerging as rivals in the global market.

So when is an 8K television not an 8K television? How can you tell your OLEDs from your QLEDs? How obsolete is your TV at home? Here are the basics on LG and Samsung’s 8K resolution dispute.

Q. Everybody’s talking about 8K TVs. What’s that about?

8K is the highest resolution currently available, with a width of roughly 8,000 pixels. 8K TVs are the latest in a long line of digital TVs with increasing definitions; standard definition, high-definition (HD), 4K and now 8K.

8K TVs have four times the number of pixels as a 4K screen and 16 times a full HD TV. Both 4K and 8K resolutions are classified as ultra-high definition (UHD).

Pixels are small illuminating dots that cover the screen to project one big image. The development of higher resolution TVs is also part of the trend toward bigger screens - the bigger your screen, the more pixels you’re going to want.

Q. You said that 8K TVs have four times the number of pixels as 4K TVs. Why isn’t it twice the number because eight is two times four?

Q.I have a 4K TV at home. How much more amazing is 8K actually going to be?

Well to fit four-times the number of pixels onto the screen, the pixels are located much closer together. This results in much sharper, more defined images that show clear outlines and tiny details in the video, like individual strands of hair, brighter stars in the night sky and foam on the edges of waves.

The advantage of the higher resolution is most obvious on bigger screens as there are more pixels to fill in such a large surface.

The easiest way to understand it is if you think about stretching an image. If you take an image on a 40-inch 4K TV and then blow it up to an 80-inch 4K TV, the pixels will be much further apart, resulting in blurry outlines and lower definition.

But whether human eyes really need 8K resolution remains a question. Responses to actual demonstrations comparing 4K and 8K TVs generally agree that 8K TVs show a better image than 4K TVs when seen in a side-by-side comparison. But some critics say that the detail 8K offers is only visible to the human eyes at a very short distance, which is not the normal viewing environment at home.

Another issue is the lack of 8K content. 8K videos need cameras that can capture the resolution and distribution technology that has more bandwidth to transfer the content. For content producers and creators, 8K is expensive. At the moment, YouTube and Netflix are really the only options for 8K content, and they really don’t have very much.

TV makers are inserting “upscaling” processors to convert 4K to 8K videos, but whether people will be willing to pay huge price tags for converted content is definitely questionable.

Q. So who is actually making 8K TVs?

China’s TCL has also announced that it will release 8K TVs later this year. Changhong, Hisense and Skyworth all introduced 8K prototypes at this year’s CES trade show in January.

Q. Samsung and LG Electronics are fighting over whether their 8K TVs are really 8K. What’s that about?

In September, LG called out Samsung, saying its 8K QLED TVs were “practically 4K.” LG’s issue was with contrast modulation (CM), a measure of the sharpness of the contrast between adjacent black and white lines shown on the display.

LG presented documents from the International Committee for Display Metrology (ICDM) - an organization that sets industrial standards in display technology - which states that resolution is more than just the number of pixels, but also depends on the ability to distinguish between pixels.

At a press conference held in Korea later that month, LG presented test reports from third-party certification institutes that showed Samsung’s 8K TVs had a CM below 20 percent. The results for LG’s 8K TVs, on the other hand, were above 90 percent.

Samsung fired back. It said that CM is an outdated standard to assess high-resolution televisions. It quoted another section from the ICDM article, saying that it “anticipates” new guidelines fit for new display technologies.

Q. Realistically, does LG have an argument, or is the Samsung TV still an 8K TV?

The ICDM’s display standards do not have legal force - they’re more like an industry-level agreement, so even if products do not accurately match them, they can’t be punished or forced to change the name. As for the committee and the Society for Information Display which runs it, neither has come out in support for either company’s argument.

In response to local media outlets’ inquiry, the ICDM said in a statement it does not “mediate” on issues that take place between industry players, even if they quote the committee’s data. It added that the ICDM does not set “compliance values,” saying that role belongs to other criteria-setting bodies like the International Organization for Standardization (ISO).

Not really. The dispute over 8K and Samsung’s use of the word “QLED” for its TVs are two separate arguments.

QLED has nothing to do with pixels, but is about a more fundamental TV technology. Last month, LG reported Samsung to the Fair Trade Commission for misleading consumers in using the “QLED” brand name despite the product not being a true QLED TV.

Among engineers and tech experts, a “true” QLED panel has quantum dots emitting light on their own without a backlight, LG claims, but Samsung is nonetheless using the term to sell a product which structurally is essentially an LCD TV with a quantum dot film.

Samsung quickly rebutted the claim, saying it had received approval from foreign advertising boards to keep the QLED label in the United States, Britain and Australia.

Q. So if I want to buy an 8K TV, what sort of price are we talking about?

As for LG, the company released two 8K resolution TVs in September: the 75-inch LG 8K NanoCell is priced at $4,999 and the 88-inch LG Signature 8K OLED is worth $29,999. Signature is LG’s high-end appliances brand.

Q. If I go out and buy an 8K TV tomorrow, how long will it be before 16K TVs turn up and mine looks old-fashioned?

It took more than two decades for 8K to go from a concept to a commercially available TV set, first introduced by Japan’s Sharp in 2017. 8K’s early history can be traced back to 1995, when Japan’s public broadcaster NHK first set out to develop the resolution.

But it was only at this year’s CES that we saw more than a handful of TV makers introduce 8K TV prototypes. So it’s safe to say 8K is still in its very early stage where the commercial market has just begun to form.

“We’re moving slowly toward 8K TVs at the end of the decade, and who knows how long it will take to get beyond that, so 16K is likely to be limited to the corporate world for the time being,” David Mercer from the consultancy Strategy Analytics told the BBC in April.