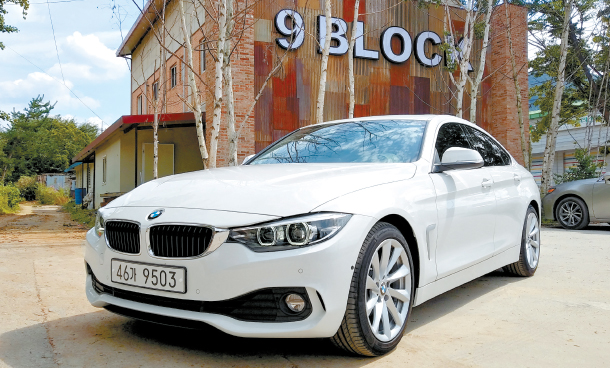 YANGPYEONG, Gyeonggi - After years living in the shadow of its more famous siblings, the BMW 4 Series is finally getting its time in the spotlight.

Unlike the luxurious 3 Series and 5 Series that have heavily contributed to BMW’s global sales, the coupe-style 4 Series has only seen meager sales in Korea. The 4 Series, which debuted in 2013, has struggled in the market here where brand value reigns supreme, and the 3 Series and 5 Series are long-established as the BMWs of choice.

But the German automaker wants to change all that with the launch of a “Special Edition” version of the BMW 420i Gran Coupe.

First things first, the Special Edition isn’t looking to unseat any other members of the BMW family. If it’s unabashed luxury you’re in the market for, the 5 Series is still going to be the way to go. If you want something with a little bit more power but that you can still drive down Garosu-gil with confidence, the 3 Series is probably for you. 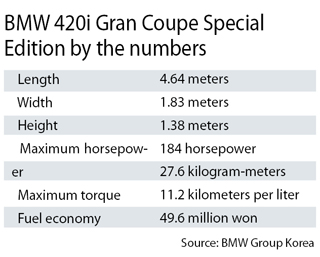 But if you’re looking to land somewhere in the middle, both in terms of performance and price, the 420i Gran Coupe Special Edition might be just for you.

As a means to promote the launch of the special edition model and let people know that the company does have cars that don’t start with a 3 or a 5, BMW Group Korea invited reporters to test drive the 420i Gran Coupe Special Edition on Sept. 19.

At first glance, the Special Edition doesn’t actually look at all different from the original 420i Gran Coupe. The car still has the traditional BMW look with its kidney radiator grille, but also has the sharp horizontal headlamps that 4 Series enthusiasts - some must exist - will recognize as unique to the range.

The 4 Series actually looks more dynamic and sporty than its swanky siblings, trying to target customers who want a luxury car, but one with a more athletic edge. The Special Edition comes in at 4.64 meters (15.2 feet) in length, 1.83 meters in width and 1.38 meters in height.

Inside the car, BMW has taken a slightly more economical approach. The leather dashboard commonly seen in BMWs is hard plastic and the luxurious leather seats are instead covered with artificial leather.

These cuts were all about costs. The Special Edition is more than 10 million won ($8,300) cheaper than the current 4 Series, with the new version starting at 49.6 million won.

The aim here is clearly to attract a new generation of BMW drivers who may have considered the brand outside of their price point, but it’s a fine line to tread. Anyone buying a BMW is doing so because they want luxury, either for themselves, to show off, or a bit of both. Cutting back on the interior design to the extent found in the Special Edition could make potential drivers question if it’s actually worth the price, despite the reductions.

When it comes to performance though, this is definitely still a BMW.

During a 50-kilometer (31-mile) drive from Seoul to Yangpyeong, Gyeonggi, the coupe moved swiftly along the road showing off its considerable power and stability at every second of the journey.

Thanks to its 2.0-liter (0.5-gallon) gasoline engine and eight-level automatic transmission, the Special Edition is rated at 184 horsepower and 27.67 kilogram-meters in torque, but the four-door model seemed even more impressive when it actually hit the road.

The car stayed confidently close to the ground even up to speeds of 160 kilometers per hour. The reduced height compared to other BMW models probably played a role, as the Special Edition is around 30 centimeters lower than the 3 Series.

Yet despite the sporty looks, the Special Edition didn’t show off much in terms of performance until it was put into its “Sport Plus” driving mode. The car was pretty average in terms of power considering the price level, and both the “Comfort” and “Sport” modes were fine, but offered nothing to get excited about.

“Sport Plus,” on the other hand, was a revelation. The Special Edition suddenly transformed into a sports car with a press of a button, hugging the road as it shot along a twisting road at far higher speeds than anticipated.

Without Sport Plus, the Special Edition is a sporty looking BMW that could be worth the price if the BMW look is what you’re going for. But if you’re in the market for the BMW because you want the real driving experience, Sport Plus is really the only way to go.

The special edition trim also stayed digital savvy in terms of convenient features. The 360-degree surrounding view camera system made parking easier, and the model also had the latest digital safety features that every car marker is expected to have these days.

The 420i Gran Coupe Special Edition promises to be a (relatively) affordable option for customers that want aspects of both the 3 Series and the 5 Series.

While it may have lost some of the more luxurious touches to come in at under 50 million won, the coupe still has plenty of power and can offer an on-the-road experience to rival any BMW out there.