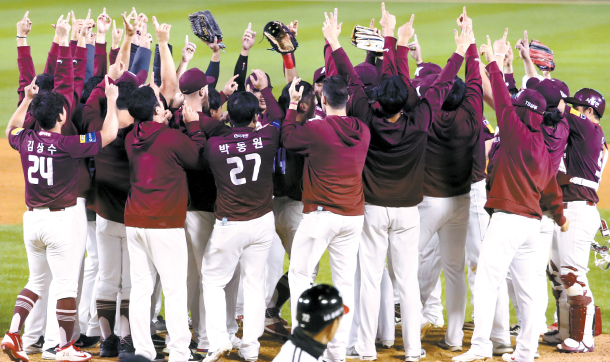 The Kiwoom Heroes celebrate after winning Game 5 of the KBO’s first playoff round against the LG Twins at Jamsil Baseball Stadium in southern Seoul on Thursday. [YONHAP]

The Kiwoom Heroes won Game 4 of the KBO’s first playoff round against the LG Twins at Jamsil Baseball Stadium in southern Seoul on Thursday.

Unlike the first three games in the series, Game 4 turned out to be a high scoring game. Once again, the Heroes were the first team to take the lead as they scored two runs at the top of the first inning, including a solo home run from Park Byung-ho. But the Twins slowly responded as they also added a run at the bottom of the first.

Then, at the bottom of the second, the Twins tied the score with Carlos Peguero’s solo home run. As Heroes’ starter Choi Won-tae gave up hits to Kim Min-sung, Yoo Kang-nam and Jung Ju-hyun, the Twins quickly loaded the bases, and with a two-run double from Lee Chun-woong, the Twins took a 4-2 lead.

The Heroes ended up down 3-5 by the top of the sixth, when they finally turned things around. At one out with runners on first and third base, the Heroes had Park Dong-won on as a pinch hitter. By hitting a two-run double, the Heroes finally tied the score 5-5.

With the sudden rally, the Heroes’ bullpen pitchers stepped up to finish the next three innings without giving up a run.

“I felt like our players became one team,” said the Heroes’ manager Jang Jung-seok. “This win feels greater because we won by working together as one.”

Lee Young-jun picked up a win by tossing one scoreless inning while Cho Sang-woo and Kim Dong-jun each picked up a hold.

Following the win, Park Byung-ho was named the first playoff MVP. Throughout four playoff games, Park hit three home runs and picked up six RBIs. Park hit a walk-off home run during Game 1 to lead the Heroes to a 1-0 victory.

“It’s actually the best,” Jang said. “Before when the first playoff round started, I said I hope this becomes the ‘Park Byung-ho series.’ I’m glad that it did. It’s hard for just the manager to try to make a team become one. I think we got to come together [as a team] from the strength of our veterans, captain Kim Sang-su, Oh Ju-won and Park Byung-ho. I’m very thankful.”

After the series, both of the managers agreed that Game 2 was the biggest game.

“Game 2 was the determinant,” Jang said. “It was a game we could have easily lost but as Park Byung-ho hit a home run in the eighth and a game-tying hit in the ninth, we headed to extra innings. That was big.”

For Twins manager Ryu Joong-il, Game 2 held the most regrets.

“Out of all the games in the series, Game 2 was the most disappointing,” Ryu said. “We were ahead in the eighth and the ninth but we still couldn’t do it.”

As the Twins’ 2019 season has ended, Ryu thanked and apologized to the fans, but said he was already looking forward to next season.

“Throughout this first playoff round, I believe that our young players have developed,” Ryu said. “The young players will be better [next year], especially on the mound.”

With a win, the Heroes will now be heading to Incheon to play in the second round of the playoffs against the SK Wyverns, starting on Monday.

In what was one of the most exciting playoff games last year, the Wyverns defeated the Heroes in the 10th inning, with a two-run home run from Han Dong-min to advance to the Korean Series.

“Since I have about two days, I’ll think about it slowly,” Jang said. “My head was only filled with LG. At this pace, I think we can play well. We’ll take a day off tomorrow, train for a day and do some light weight training or free training on the day we have to move.

“I’ll consider changing the entry, but I don’t have any specific plans yet. There will be a change in the batting order of Lee Jung-hoo and Kim Ha-seong in the playoff. Within the first to fifth batters, I’ll make changes, depending on the pitcher.”

The second playoff round will be played in a best-of-five format and the first two games will be at Munhak Baseball Stadium in Incheon. Game 3 - and if necessary Game 4 - will be played at Gocheok Sky Dome in western Seoul.

If the series extend to five games, the final round will be back at Munhak.