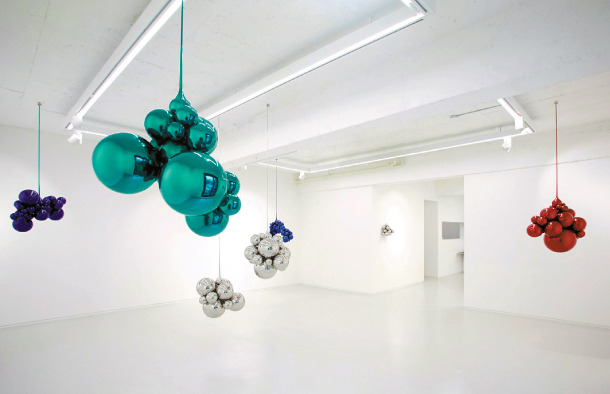 Shin Han-chul’s works are all about spheres - lots and lots of them.

In his 17th solo exhibition “Proliferation,” the sculptor continues to explore his favorite geometrical figure in diverse configurations and shapes.

While the sphere clusters coated in blue musters thoughts of grapes and the reddish balls sparkle like Christmas ornaments, it’s not hard to associate Shin’s pale gray and dark red foamy creations to something a little more ominous.

“I don’t think cancer centers will really like these, especially given the title ‘proliferation,’” Shin mused Tuesday during a press tour at Gallery Woong in Jongno District, central Seoul, where the exhibition is being held.

But these spheres are far from malicious. In fact, Shin says he intended to symbolize the different communities within Korean society through the spheres in hopes that they would overcome their differences and harmonize.

“You have to respect the other groups within society to earn respect for yourself. There are both larger and smaller spheres in my works, but they are in harmony. We need to be generous and understand each other to reach that kind of harmony in real life.

“I usually refer to my spheres as ‘dream clusters,’ in the hope of signalling something optimistic,” Shin said.

More than anything, what seems to be at the center of the works at “Proliferation” is balance.

“Spheres are organisms that contain both yin and yang. It’s a perfect shape that doesn’t have a top or bottom, nor left or right,” he added.

Balance is not only important for the works aesthetically, but physically as well.

An average-sized work weighs around 14 kilograms (31 pounds), but the spheres, crafted in stainless steel and hollow on the inside, are supported delicately on a thin pole or dangle from hooks on the ceiling.

Such a technique comes after years of practice, Shin says. Previously, his spheres were displayed on the ground.

Another important change for this series is that the works have reflective coatings so visitors can see themselves on the works.

“I wanted my works to be a little more friendly to the audience. If in the past they only interacted with viewers, now the audience is inside the works themselves.”

The exhibition runs through Saturday. Hours are from 10 a.m. to 6 p.m. Entry is free.