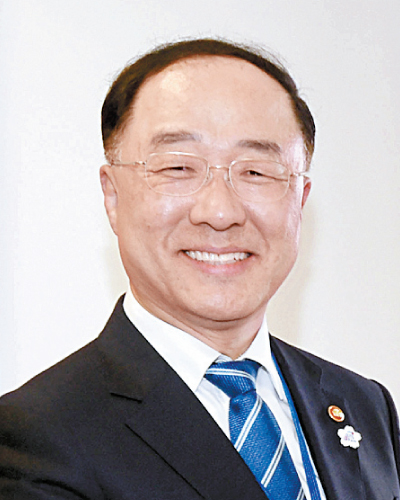 Minister of Economy and Finance Hong Nam-ki promised all available policy measures to keep economic growth above 2 percent this year, downplaying the government’s official target of at least 2.4 percent growth.

According to the Finance Ministry, Hong told global credit rating agency officials that Korea’s economic growth this year will be maintained in the 2 percent range, while admitting that its official target would be difficult to reach during a meeting with Standard & Poor’s (S&P) and Fitch Ratings on Thursday in Washington.

Hong’s comments come as global institutions have been pessimistic over Korea’s growth.

According to a recent report by the Korea Center for International Finance, global investment banks’ average predictions for Korea’s growth this year were 1.9 percent.

Korea’s economy has grown by over 2 percent every year since 2009, when it recorded 0.7 percent growth during the aftermath of the global financial crisis.

The economy this year has been weighed by global trade friction, leading to on-year declines for Korea’s exports since December last year.

Hong explained that next year’s growth will improve, citing a recent forecast by the International Monetary Fund (IMF), which expects growth of 2 percent this year and 2.2 percent next year. He highlighted the government’s proposal for an expansionary budget next year, while maintaining fiscal health. Korea’s debt-to-GDP ratio is expected to be at 39.8 percent next year, far lower than the Organisation for Economic Cooperation and Development average at over 100 percent.

The country’s economy grew by only 6 percent in the third quarter, a 27-year low. Korea’s economy will likely be impacted by its neighbor’s slowdown, considering their deep-running trade ties. China is Korea’s largest trading partner.

In the face of an economic slowdown, Korea has resorted to monetary and fiscal measures.

The central bank lowered the interest rate to a historic low of 1.25 percent this week.

The decision has, however, had limited impact on the bond market.

According to the Korea Financial Investment Association, three-year bond yields rose for two consecutive days since the rate cut, ending at 1.375 percent on Thursday.

President Moon Jae-in called for more expansionary spending on Thursday, including in construction projects, which the current administration had previously distanced itself from, underscoring an urgency to vitalize the economy.

The government expects the economic slowdown to continue in the near future, according to the Finance Ministry’s latest monthly report released Friday.

“The Japanese government’s export restrictions continue, and although there was a first stage agreement made on the U.S.-China trade conflict, uncertainties to future negotiations exist,” read the report.