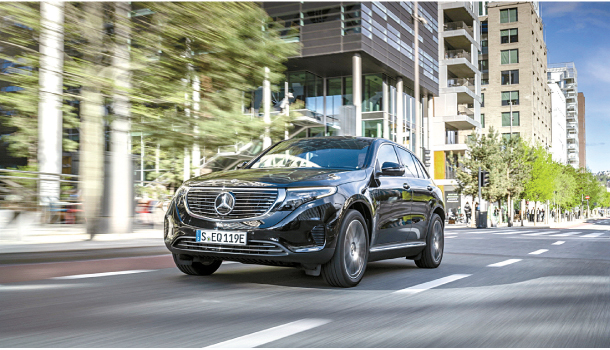 Mercedes-Benz is launching its first all-electric model in Korea as it strives to strengthen its lead in Korea’s imported vehicle market.

The Korean unit of the German automaker announced in a statement Monday that it will begin sales of the EQC 400 4MATIC SUV from today. The EQC is the first pure electric vehicle from the Mercedes-Benz electric vehicle (EV) brand “EQ” that was unveiled in September last year and showcased during the Seoul Motor Show in March this year.

“The EQC embodies the future of mobility, being that next-generation car,” said Mark Raine, vice president of product and marketing at Mercedes-Benz Korea, in a statement. “A modern and contemporary design are complimented by innovative technology, the latest in digitalization and connectivity, as well as a powerful and efficient purely electric powertrain.”

In addition to launching the EQC, Mercedes-Benz Korea is launching an EV membership scheme for its users to charge their EVs. EQC drivers are offered a Mercedes Me Charge Membership Card that allows them to charge their cars with a single card at almost all EV charging stations throughout the country.