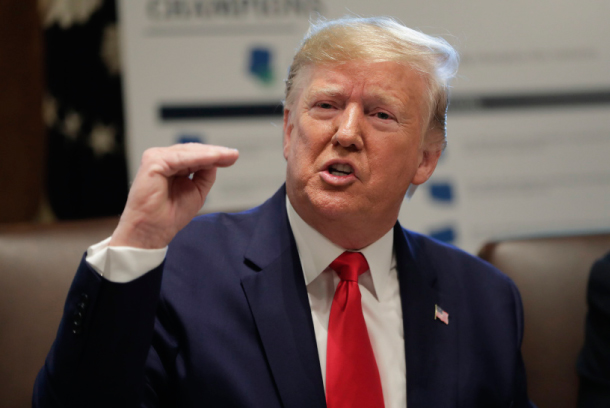 U.S. President Donald Trump on Monday said there would be a “major rebuild” of North Korea at some point, and he referred to some “very interesting information” he recently obtained in regard to the country.

It was unclear whether the remark, delivered near the end of a cabinet meeting, alluded to some progress in Washington’s stalled denuclearization negotiations with Pyongyang or whether it could be another of Trump’s idiosyncratic ideas of striking an ultimate deal with the regime.

Earlier in the briefing, in which he also discussed Ukraine and whistle-blowing in his administration, Trump again credited himself for preventing a “big war with North Korea.” He claimed that “if somebody else became president, with that same mindset that they had,” war may have broken out.

The president went on to underscore his personal chemistry with North Korean leader Kim Jong-un, saying there was mutual respect in the relationship that was lacking in Kim’s interactions with the preceding Barack Obama administration.

Reflective of this, Trump claimed that former President Obama “tried 11 times” to call Kim over the phone, but that “the gentleman on the [other] side did not take his call.”

“Lack of respect,” Trump said. “But he takes my call.”

Trump’s comment about a “rebuild” may be connected to a report on Saturday from a South Korean newspaper, the Hankook Ilbo, relating to a development offer made by U.S. envoys to their North Korean counterparts at nuclear talks in Stockholm on Oct. 5.

Citing a high-ranking South Korean diplomat familiar with the discussions, the report said one of the various economic concessions brought up by the U.S. delegation in exchange for the North’s denuclearization was a proposal to help develop the Wonsan-Kalma coastal tourist area, a massive beach resort under construction on the country’s eastern shoreline that is one of Kim’s pet projects.

Since early last year, North Korea has devoted immense resources and attention to developing the 5-kilometer (3.1-mile) stretch of beach in Kalma into a tourist spot, complete with rows of hotels, restaurants and shops capable of attracting visitors.

Kim has been invested in the project since its inception, personally ordering its completion in the “shortest time” possible in a New Years’ address and making major revisions to the plans during an on-site visit last October after he found that it wasn’t “perfect in the artistic aspect,” according to the North’s Korean Central News Agency English-language report.

Kim has attempted to place the project in the context of the North’s struggle to grow amid heavy international sanctions, saying that the Wonsan-Kalma coastal tourist area “would be an on-target impact on hostile forces and is precisely a decisive battle for safeguarding the authority of the Party and a worthwhile work for creating and bringing into a reality the happiness of the people.”

Yet financial difficulties and the difficulty of obtaining building materials because of sanctions prevented the project from meeting deadlines, and it was delayed twice from an initial estimated completion date of last April 15 - the birthday of the regime’s founder Kim Il Sung known as the Day of the Sun - to Oct. 10 - the founding anniversary of the North’s ruling Workers’ Party - to finally next year’s Day of the Sun.

The importance of the Wonsan-Kalma resort for Kim’s economic development agenda may have prompted the United States to offer its help with the project as a carrot in the nuclear negotiations. Trump himself, with his background in real estate development, applauded the North’s tourism potential after his first summit with Kim in Singapore last year, specifically referring to its “great beaches,” which he said would make for ideal venues for condos.

While it is unknown how the North’s envoys responded to the offer in Sweden, Kim Myong-gil, Pyongyang’s top negotiator in the talks, announced shortly after the meeting that the discussions had fallen apart because Washington had not relented from its “old viewpoint and attitude” that the North undertakes denuclearization first before receiving any economic concessions. David Stilwell, U.S. assistant secretary of state for East Asian and Pacific Affairs, testified at a Senate hearing last week that the United States will need to “encourage [North Korea] to continue” diplomatic engagement, namely by considering arrangements that could address the regime’s security interests, though he appeared to rule out sanctions relief.

“There’s only one thing that North Korea thinks about,” Stilwell said, in reference to the North’s fixation with its security. “A lot of these other things that they throw out there are distracters, leverage in some form.”