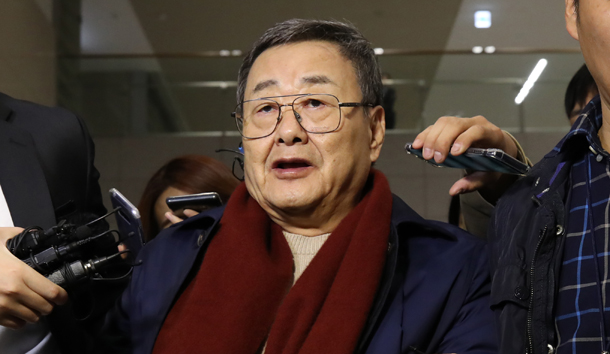 Police arrest former Dongbu Group Chairman Kim Jun-ki, who is accused of sexually assaulting both his secretary and maid, upon his arrival at Incheon International Airport on Wednesday. [YONHAP]

Former Dongbu Group Chairman Kim Jun-ki, who is accused of sexually assaulting both his secretary and maid, was arrested Wednesday upon his arrival at Incheon International Airport.

Kim, 75, flew in from New York into Incheon on Monday and was arrested immediately. He emerged from the arrival gate with his hands cuffed and with police officers on either side of him around 3:47 a.m.

“I am sorry for having caused troubles and concerns,” he told a group of reporters at the airport.

In response to a question on whether he admits to the alleged charges of sexual assault, however, Kim said, “I do not,” adding that he will “be truthful during questioning.”

Police said they will start questioning Kim immediately. He was transported from the airport to a police precinct located in the vicinity.

Kim was sued by his secretary in September 2017 for sexually assaulting her.

She accused Kim of inappropriately touching parts of her body on a regular basis between February and July 2017. The secretary worked for Kim from 2014. Police at the time said she submitted video footage showing Kim’s conduct.

Dongbu Group at the time acknowledged there was physical contact but insisted there was also mutual consent. The company argued the former secretary had malicious intent and blackmailed the chairman with the video.

Kim resigned from his post as founder and chairman of Donbgu that month. Kim founded Dongbu in 1969 and expanded it into a sprawling conglomerate with businesses in insurance, finance and electronics.

Kim was additionally sued for sexual assault by his maid in January last year. Kim’s lawyer said there was also mutual consent with the maid.

Police listed Kim with Interpol in November 2017 and the Ministry of Justice also requested the U.S. government to locate and extradite Kim in July this year. Police said Kim returned to Korea of his own volition and had notified the police beforehand of his arrival time in Incheon airport.