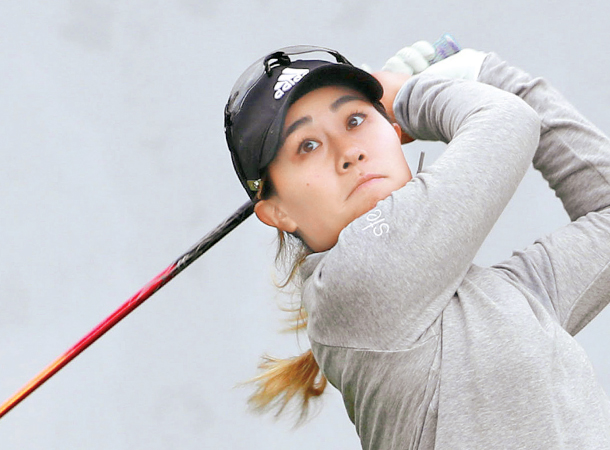 BUSAN — Danielle Kang of the United States arose as the new leader after the second round of the BMW Ladies Championship at LPGA International Busan in Busan on Friday.

With seven birdies and two bogeys, Kang hit a round of five under par, 67, on the second day of the tournament.

Kang, who started the second round tied for second, got off to a great start with a birdie on the par-4 first. Although she made bogey on the par-4 second, she quickly made up for it with two straight birdies on the par-3 third and the par-5 fourth. Then, Kang added two more — on the par-3 sixth and the par-5 ninth — to shoot four under par, 32, in the front nine.

On the par-5 15th, Kang finally regained her sole lead with another birdie. By finishing her next three holes with pars, Kang took a two shot lead.

“I feel pretty good,” Kang said. “I feel very comfortable about my game. Putting aside the position, I’m having a lot of fun out there and improving on things I’ve been working on. So I’m happy.”

Busan is a special place for Kang, as it is her father’s hometown. Although Kang was born in the United States, she lived in the city for about three years as a child. Before the tournament, Kang was granted honorary citizenship by Busan.

In addition to a great performance at her father’s hometown, this is also a great streak for Kang. Right before the BMW Ladies Championship, Kang successfully defended her title at the Buick LPGA Shanghai last weekend.

Kang will tee off the third round of the tournament with Na Hee-won and Lee Seung-yeon at 10:13 a.m. today.

Na and Lee are tied for second, just one shot behind the leader, at eight under par, 135, after the first two days.

As Ko added another bogey on the par-4 17th, she dropped and is now tied for fourth at eight under par, 136, after the first two rounds. Ko is in a four-way tie with Korean golfers Jang Ha-na and Lee So-mi and Minjee Lee of Australia.

On day two of the tournament, Kristen Gillman of the United States made headlines for hitting a hole-in-one on the par-3 13th hole on Friday. Gillman shot one under par, 71, on second day and is now tied for 30th, with a two-day total of three under par, 141.