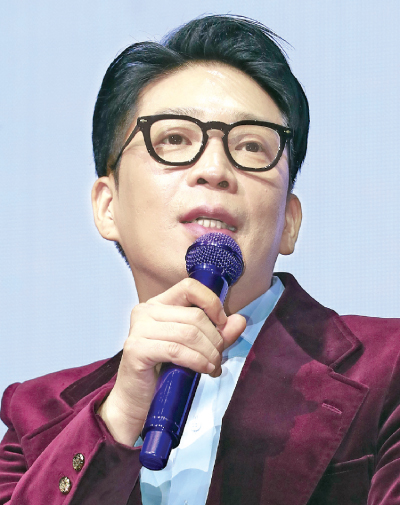 MC Mong speaks at a press conference on Friday. The singer put his career on hold in 2010 after being accused of military service evasion. [YONHAP]

Nine tumultuous years after his career was put on hold for suspected military service evasion, MC Mong is back with his eighth full-length album “Channel 8.”

The once-successful singer had made a few releases after evasion accusations surfaced in 2010, but with “Channel 8,” MC Mong did something he hadn’t done for nearly a decade - hold a press conference and face questions from reporters.

“This feels like a dream and I’m a bit disoriented. I hope you understand if I stutter when I’m talking,” MC Mong told press at Yes 24 Live Hall in eastern Seoul on Friday. The singer, who was known for his outgoing personality before the scandal, was visibly soft-spoken and somber, choosing his words carefully.

“I named this album ‘Channel’ because it’s my biographical story. My life 10 years ago and today are so different. My priority now is to have an average life, something I still haven’t been able to achieve. This press conference is the first step of courage I’m taking towards that direction.”

MC Mong, who was hugely popular for his hits “Circus” (2008) and “Ice Cream” (2006), has since become one of the most vilified figures in Korea’s entertainment industry. Although the Supreme Court ruled in 2012 that MC Mong was innocent of deliberately removing his teeth to avoid military conscription, he was still sentenced to six months in prison for using other tactics to delay his mandatory duties. In a country where all able-bodied men are required to spend nearly two years doing military service, MC Mong was scorned for his actions and much of the public remains upset with the singer to this day.

Negative comments targeted towards MC Mong often extend to other artists who work with him. When asked about whether he was worried that rising trot singer Song Ga-in would face backlash for appearing in the album’s title track “Fame,” MC Mong said that he hoped “she doesn’t face any damages for her participation,” adding that “she judged the song solely based on its music.”

While many of the songs in “Channel 8” express MC Mong’s painful experiences like not leaving the home for a whole month, “Fame” seems like an extension of his playful hits like “Circus,” featuring vibrant colors, dancing and a lot of Korean elements.

“I’ve gone to counselling and the advice I got was to stop staying at home and go outside. People were unexpectedly welcoming, and I think that’s also why I was able to get the courage to create such an upbeat song,” MC Mong reflected.