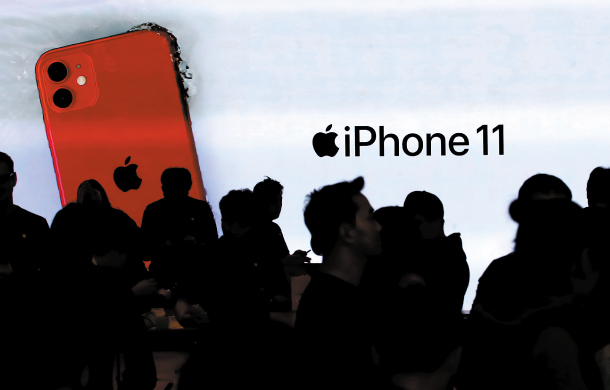 Apple’s iPhone 11 landed in Korea Friday, about a month and a half after the phone was introduced in the United States.

Despite early skepticism about the phone’s design, with the cameras on the back said to look like an induction stove, people lined up in front of the Apple store in Garosu-gil, southern Seoul, from early in the morning to get their hands on the latest Apple device.

The phone proved popular, especially with people in their 20s and 30s, according to preorder results from SK Telecom and KT. Preorders were taken by the carriers for a week from last Friday.

According to SK Telecom on Friday, 44 percent of the customers who preordered iPhone 11 on its online sales platform were in their 20s and 37 percent were in their 30s.

It said 92.6 percent of the customers who preordered the iPhone 11 series were already users of previous generation iPhones.

There were doubts by industry insiders on whether the latest iPhones, which only support 4G long term evolution (LTE), would be welcomed in Korea, where 5G service has been available since early this year.

Recently released phones by competitor Samsung Electronics, including the Galaxy Fold and the Galaxy Note10, only came in 5G versions in Korea.

Though the phones support both 5G and 4G LTE, customers had to subscribe to heftier 5G phone plans.

However, some of the early buyers that lined up at Garosu-gil said they are satisfied with 4G LTE, as 5G is not yet stable.

“I think there are customers willing to use cheaper 4G LTE phone plans for a year or two with iPhone 11,” a source from the mobile industry said.

Korea is still in the early stages of rolling out 5G, and only about 10 percent of country’s network supports 5G connection so far.

In Korea, the iPhone 11 starts from 990,000 won ($843.77) including tax. While Apple has decided to make the phone $50 cheaper in Korea than the iPhone XR, the base model of the previous generation, in the United States, the starting price of the iPhone 11 and the iPhone XR is the same.