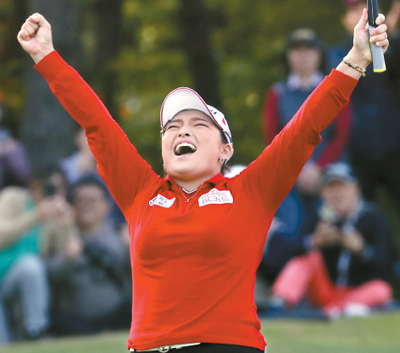 Jang Ha-na celebrates after making a birdie on the third playoff hole to win the inaugural BMW Ladies Championship at LPGA International Busan in Busan on Sunday. [YONHAP]

After three playoff holes, Jang Ha-na was declared the winner of the inaugural BMW Ladies Championship at LPGA International Busan in Busan on Sunday.

With six birdies, an eagle and a bogey, Jang shot seven under par, 65, on the final round to tie for the lead with Danielle Kang of the United States at 19 under par, 269, to force a sudden-death playoff.

Kang, who played in the group ahead of Jang, got off to a great start by cruising through to take the lead with five birdies on the front nine. At the time, Jang was two shots behind Kang as she shot two under par, 34, in her first nine holes. As Kang started her back nine with back-to-back birdies on the par-4 10th and the par-5 11th, she got to 18 under par, four shots ahead of Jang.

But right when it seemed as if Kang was going to win, Jang slowly picked up her pace.

While Kang made pars, Jang continued to make birdies to catch up. Jang added a birdie on the par-5 15th and another on the par-4 17th to tie for the lead at 19 under par. As both players finished with pars on the par-4 18th, they headed into a sudden-death playoff.

Playing the 18th hole as their first playoff hole, Kang hit her second shot over the green from the fairway rough while Jang missed the green. Kang hit a great chip from over the green to leave herself a short up and down putt, but Jang left her par putt pretty long, about 15 feet from the hole.

However, Jang once again fought back by making the par putt and, as Kang made her putt, the playoff headed back to the 18th hole tee box.

Rather than playing the 18th hole for a third time, the two golfers headed to the par-4 10th for the third playoff. Once again, both Kang and Jang hit the fairway and the green. This time, Jang stuck her second shot. Then, as Kang missed her birdie putt and Jang made hers, Jang was finally declared the winner of the inaugural tournament.

“I think that I played to the level of this game, which is the best,” Jang said. “I’m also happy that I went into playoffs with my closest friend, Danielle Kang. I think making an eagle during this round was very big.”

With a win, Jang took home the prize money of $300,000 and picked up her second win of the season. Prior to a win on Sunday, Jang picked up her first win at the KLPGA Tour’s inaugural Hana Financial Group Championship, held during the first week of October. Two wins in the second half of the season also allowed Jang to become the new leader on the KLPGA Tour’s money ranking this season.

This is the first time since the ISPS Handa Women’s Australian Open in February 2017 that Jang has won an LPGA Tour event.

Throughout her career, Jang has picked up 11 wins on the KLPGA Tour and five on the LPGA Tour. With a win in Busan, Jang could go back to the United States starting in the 2020 season, but she said nothing has been decided.

“As for the going back to the LPGA, there’s a lot to think about,” Jang said. “My mother’s not quite well, yet. I can’t say right now.”

Aside from the victory, world No. 1 Ko Jin-young also made headline as she secured the LPGA Tour’s player of the year award. Ko shot one under par, 71, on the final day to finish the tournament tied for 9th at 10 under par, 278.