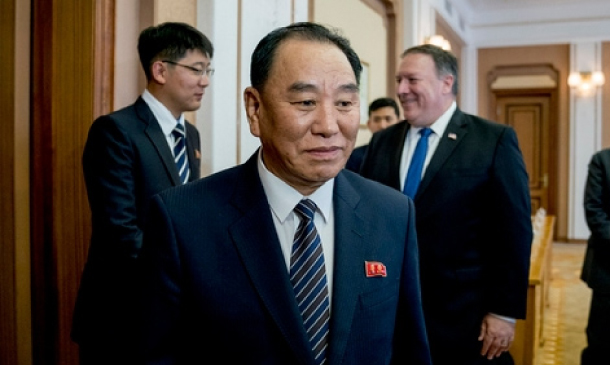 Kim Yong-chol, the former spymaster who headed Pyongyang’s engagement with Washington last year, slammed the United States Sunday for its “hostile policy” toward the North, a policy he said threatened a return to belligerency.

In a statement released in his name and with his title of chairman of the Korean Asia-Pacific Peace Committee (Kappc), he said that while “close personal relations” between North Korean leader Kim Jong-un and U.S. President Donald Trump helped salvage ties in the past, the goodwill between the two should not be pushed.

“There is a limit to everything,” the statement read. It appeared to suggest that the year-end deadline on nuclear negotiations should not be missed.

Kim Yong-chol also accused the “warlike forces” of the U.S. military for “planning nuclear strike exercises” against the North, and said that Washington’s activities with regards to North Korea at the United Nations General Assembly were testing the regime’s patience.

“The situation points to the U.S. intent to isolate and stifle the DPRK in a more crafty and vicious way than before, instead of complying with our call for a change in its calculation method,” the statement continued, using the acronym for the North’s official name, the Democratic People’s Republic of Korea.

While an end-of-year ultimatum for a deal has been pressed by the North on multiple occasions, including by the regime’s nuclear envoy after the collapse of denuclearization talks in Stockholm earlier this month, Sunday’s statement stands out given that Kim Yong-chol once spearheaded North Korea’s diplomacy with the United States and South Korea.

As the director of the United Front Department (UFD), the North’s leading agency in charge of diplomacy and espionage vis-a-vis the South, Kim Yong-chol undertook the North’s first mission to Washington in over a decade in May last year to deliver Kim Jong-un’s letter to Trump, an event that made possible the first summit between the two countries in Singapore that June.

Kim Yong-chol was the first to receive the ax once denuclearization negotiations soured at the second U.S.-North Korea summit in Hanoi, Vietnam, in February, as he had arranged the talks.

He was also sacked as chief of the UFD - though he retained a vice chairmanship in the North’s ruling Workers’ Party - while authority to conduct negotiations was then passed to the North’s Foreign Ministry, whose officials apparently favored a more hard-line approach towards talks with Washington.

Pyongyang’s decision to issue a statement in Kim Yong-chol’s name can be interpreted as an attempt to apply pressure without antagonizing the United States, in light of his efforts to realize the summits, analysts said. The Kappc is also the state body used to improve ties with countries with which North Korea does not have diplomatic relations, like the United States and South Korea.

The statement follows another published message to Washington from a senior North Korean official.

On Thursday, Foreign Ministry adviser Kim Kye-gwan - who once headed the North’s delegation to the six party talks in the mid-2000s - told the official Korean Central News Agency that Kim Jong-un described his relationship with Trump as “special.”

But for policymakers in Washington, Kim Kye-gwan only had words of reproach, saying they were “preoccupied with the Cold War mentality and ideological prejudice,” which are contrary to Trump’s better judgement.

Kim Kye-gwan’s statement also referred to the end-of-year deadline, which has been connected to nuclear or intercontinental ballistic missile tests and an end to Pyongyang’s self-imposed moratorium on such tests. His comments were in line with earlier statements from the North.