He won’t have all of his top players on hand in his debut as the head coach of the South Korean women’s national football team in December, but Colin Bell has chosen to look on the brighter side of things. 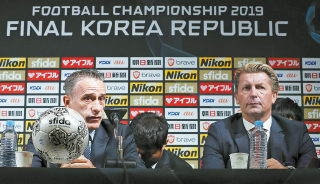 The Englishman, hired earlier this month to take over the Taeguk Ladies, will make his South Korea debut at the East Asian Football Federation (EAFF) E-1 Football Championship. The southeastern metropolitan city of Busan will host the regional event from Dec. 10-18, with China, Japan and Chinese Taipei in action in the women’s competition.

The EAFF event isn’t part of FIFA’s international match calendar, and this means clubs aren’t obligated to release their international players for the occasion. Bell will not have the services of national team mainstays based in England, such as Chelsea FC Women stalwart Ji So-yun and West Ham United FC Women midfielder Cho So-hyun, who’s also a longtime South Korean captain.

But at the tournament’s kickoff press conference on Tuesday, Bell said their absence will mean a chance for new faces from the home-based clubs to step up and “take more responsibility on the pitch.”

“I am looking forward to seeing how these girls react to this challenge,” Bell added.

He said he has “quite a few objectives” on his mind, one of which is to lift the trophy at the end.

“The main objective is to win matches. It’s important to instill this mentality in players,” Bell said. “We’ll use these games to instill this style of play we’re looking to adapt to and create and build. That’d be a very large objective.”

But Bell is also looking at the big picture. About two months after the EAFF tournament, South Korea will host the third round of the Asian qualification for the 2020 Tokyo Olympics. South Korea has never played at an Olympic women’s football tournament, and they will compete against North Korea, one of Asia’s top women’s football powers, plus Vietnam and Myanmar.

“We’re using this tournament as a good preparation for the Olympic qualification,” Bell said. “But that doesn’t mean we’re using this competition as having three friendly matches. We’re taking it very seriously.”

The KFA announced on Monday that North Korea had pulled out of the E-1 championship, depriving fans of the rare opportunity to see an inter-Korean showdown south of the border.

Asked if he was disappointed not to get a chance to face North Korea before meeting them again in the Olympic qualifier next year, Bell said, “I don’t really think it’s my position to get into politics.”

“Personally, I’d imagine the players would love to be playing [North Korea],” he said. “I’d much rather talk about teams that are actually going to participate. I think that’s exciting enough.”

Along with the women’s team, the Korean men’s team also has a big match ahead of them at the EAFF E-1 Football Championship.

Paulo Bento may be Portuguese, but as the head coach of the Korean men’s national football team, he has a good grasp of the often bitter sporting history between his team and Japan. When Bento’s team faces Japan in December, he said he will “take things seriously.”

“I fully understand the meaning of this match,” Bento said at the tournament’s kickoff press conference on Tuesday in Seoul. “And it will be more heated than any other match. It’ll be our last match of the tournament, and hopefully we’ll finish the competition on a high note and get the result we want.”

Korea leads Japan with 41 wins, 23 draws and 14 losses all time. Their most recent showdown came at the 2017 EAFF E-1 Football Championship held in Japan, and South Korea prevailed 4-1 behind two goals by forward Kim Shin-wook.

But that victory came on the heels of three draws and two losses in their five previous meetings, and it was South Korea’s first win since May 2010. Diplomatic tensions between the neighbors, stemming from their trade spat, will only add spice to the upcoming contest.

“No matter what the tournament is, we’ll have to do the best we can and approach it professionally,” Bento said. “We’ve won four championships, including the last two. This means our fans will have high expectations this time around. The one thing I can promise our fans is we’ll do the absolute best we can.”

Bento will also have to pick his players from the domestic K-League and other Asian leagues whose seasons will be over by then, and he won’t have the services of Europe-based stars such as Tottenham Hotspur’s Son Heung-min.

Bento said he’ll have to prepare for the EAFF matches differently compared to other matches he’d coached.

“It’ll be an opportunity for us to look at different players, and you’ll see some fresh faces on our roster,” Bento said. “I don’t know how the preparations went for previous E-1 championships, but my mentality is we have to do the best we can in whatever circumstances we’re in.”