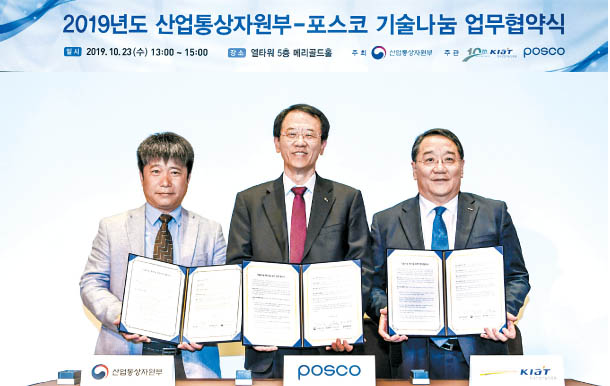 From left to right: Yang Kwang-seok, a director at the Ministry of Trade, Industry and Energy, Posco senior managing director Lee Duk-lak and Korea Institute for Advancement of Technology President Seok Young-chul pose after signing an agreement to share technology with small- and medium-sized enterprises. [POSCO]

Korean steelmaker Posco has achieved 1 trillion won ($856 million) in operating profit for nine consecutive quarters despite unfavorable factors such as the rise in the price of iron ore and the U.S.-China trade dispute.

Adding to its success, in June Posco was chosen as the world’s most competitive steel company by global steel specialist World Steel Dynamics, taking the title for a 10th consecutive year.

Thanks to its excellent performance in temperatures as low as minus 196 degrees Celsius (minus 320.8 degrees Fahrenheit) and price competitiveness compared to nickel alloy steel, cryogenic high manganese steel will gradually replace nickel alloy steel in the LNG tank market.

It is expected that 890 LNG tankers and 4,700 LNG carriers will be ordered worldwide from this year to 2030.

Posco will expand its high manganese steel technology based on domestic and international manufacturing standards to actively win orders for LNG-related projects.

Early this year, Posco succeeded in mass-producing its high alloy stainless steel S31254, which can be used as a material for making scrubbers — devices that allow shipping lines to use regular bunker fuel by removing sulfur from emissions.

S31254 is a premium steel product that is highly resistant to crevice corrosion.

Until last year, steel for desulfurization facilities was only produced in a few overseas steel mills, causing inconvenience for domestic companies.

However, Posco’s mass production of S31254 has shortened delivery time by more than eight months and reduced the burden on prices for Korean firms, ensuring a stable material supply for clients.

Posco has received applications from small- and medium-sized enterprises (SMEs) for patent transfers after the free distribution of 940 patents held by Posco and the Research Institute of Industrial Science and Technology (RIST) in August.

Of these, 141 are provided free of charge to 41 SMEs and include 52 patents for industrial and general machinery, 22 for electronic and information communications, 32 for eco-friendly and energy-based platforms and 35 for innovative growth-based technologies.

Posco will spend a total of 20 billion won over the next five years to promote the construction of small factories for SMEs.

For this project, Posco has organized a smart promotion team with experts in each field to visit the SMEs and support smart factory implementation in energy reduction, inventory management and automatic production.

The company is currently recruiting participants, with 500 SMEs expected to benefit over the next five years.

In addition, Posco will share its experience and knowledge with participating companies through the consulting program, providing pre-diagnosis and improvement plans for smart factory building.