Samsung Electronics reported strong third-quarter results as healthy smartphone and display performances made up for weakness in the company’s memory chip business. 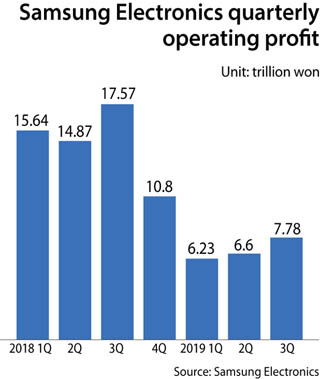 It was the first time Samsung, which is No. 1 in Korea in terms of market capitalization, broke 7 trillion won in operating profit in a quarter in 2019.

The figures are nowhere near the results achieved in 2017 and 2018, when Samsung’s quarterly operating profits regularly broke 14 trillion won, supported by a strong demand for memory chips.

Profit in memory chips in the third quarter was 3.05 trillion won, now down for three quarters straight.

Sales volumes of DRAMs and NANDs were higher the company’s initial projections - mainly driven by demand from Chinese IT buyers concerned about uncertainties in the market, including trade disputes.

While strong unit sales did not lead to better profits, as the demand increase wasn’t enough to drive up prices, it did have the effect of reducing the company’s memory inventory.

During a conference call, Samsung said the inventory of NAND chips had already come within the normal range of four to six weeks. The company anticipated its DRAM inventory will come into line by the first half of 2020.

Samsung’s IT & mobile communications division - which includes smartphones and telecommunications equipment - generated an operating profit of 2.92 trillion won, an 87 percent increase on quarter and its best result in five quarters. The division has been struggling as it battles aggressive Chinese phone makers and faces longer purchase cycles for premium phones.

The Galaxy Note10 and the mid-priced A series led the growth. Samsung sold 85 million smartphones during the third quarter, an increase from the 81 million in the third quarter of 2019 and last quarter’s 83 million.

The fourth quarter is seen as challenging. Overall smartphone demand will go down, but Samsung plans to maintain marketing.

However, 2020 will be a better year, the company said, as demand for 5G phones will rapidly increase. The boom in the 5G market will also help Samsung’s memory business.

For the display business, third-quarter operating profit totaled 1.17 trillion won, a 56 percent increase on quarter. The rise came from better performance in terms of small- and mid-sized organic light-emitting diode (OLED) displays, which accounted for 80 percent of the division’s sales. Business for its large-screen televisions was weak due to fierce competition.

Samsung will maintain its investment stance. The company recently announced a 13 trillion won investment in next-generation large quantum-dot (QD) displays. Construction of its Phase 2 facilities in Xi’an, China, and Pyeongtaek, Gyeonggi, will continue, and the plants will start operation next year, as planned. Both are semiconductor factories.