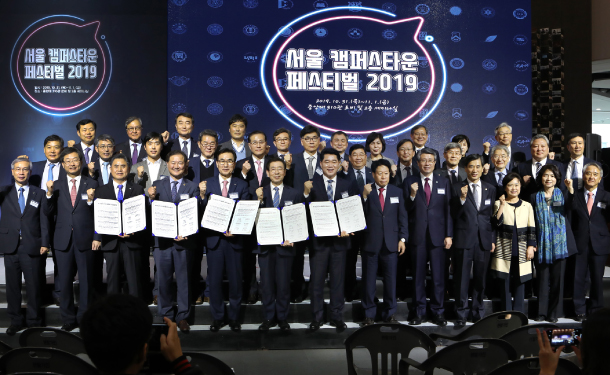 Seoul Mayor Park Won-soon, sixth from front left, and presidents and vice presidents of some 40 universities in Seoul, including Chung-Ang University President Kim Chang-soo, fifth from front left, and KC University President Lee Gil-hyung, fifth from left in third row, celebrate the signing of a resolution on Thursday at Chung-Ang University in southern Seoul to create a friendly ecosystem for young start-ups in Seoul. The universities are members of the city government’s Campus Town program, which was established in 2016 to fund start-up activities by students. The resolution was signed by the city government, an association of local district offices, the Seoul Metropolitan Council, an association of student-led start-ups and Shinhan Bank. [PARK SANG-MOON]