KBL’s centers find nothing but net

KBL’s centers find nothing but net 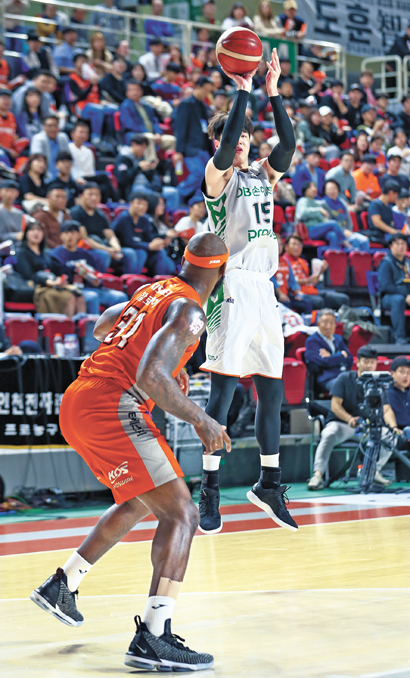 Kim Jong-kyu of the Wonju Dongbu Promy, right, throws a 3-pointer during a match against the Incheon ET Land Elephant in Incheon on Oct. 27. [KBL]

The Korean Basketball League’s (KBL) centers are evolving, stepping away from the familiar territory under the net to add a few long-range shots to their arsenal.

Traditionally, basketball centers tend to stay under - or somewhere in the air next to - the net, as they are known for their dunk shots and rebounds. Generally the tallest players on the team, the center - also known as the five or the big man - is typically a strong player both offensively and defensively, but always at short range.

In recent years, as the game has started to move further away from the net and dunking has started to play a smaller role, a new kind of center has emerged in the NBA. This new idea of a center that can shoot, known as a stretch five, is starting to make its way to the KBL. 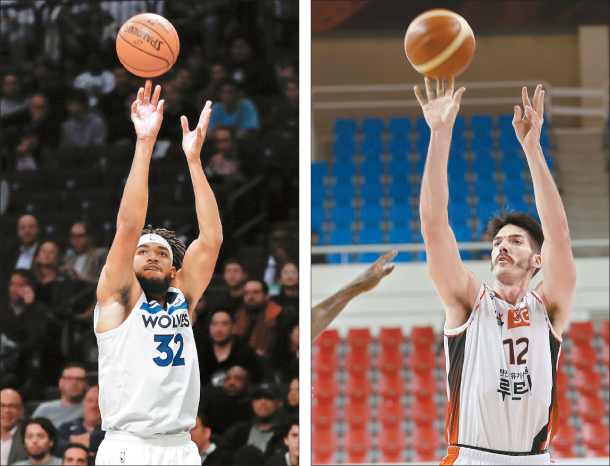 Left: Karl-Anthony Towns of the Minnesota Timberwolves throws a 3-point shot during an NBA game on Oct. 23. Right: Byron Mullen of the Busan KT Sonicboom throws a 3-pointer during a match against the Ulsan Hyundai Mobis Phoebus at Dongchun Gymnasium in Ulsan on Oct. 27. [AP/YONHAP, NEWS1]

This season, the Busan KT Sonicboom’s Byron Mullens is the tallest player in the league, at 2.13 meters (7 feet). Mullens, who joined the KBL this year, was expected to struggle for a while as he adapted to the new league.

Instead, he defied all expectations. In nine matches, Mullens has averaged 16.9 points per game and is leading the Sonicboom’s scoring along with guard Heo Hoon, who is averaging 18.2 points per game.

Despite being a center, a large part of Mullens’ success comes from his 3-point shots. Although he spends most of his time exactly where you would expect - underneath the net in the center of the action - when the Sonicboom needs to get some points on the board, Mullens is suddenly at the 3-point line, ready to deliver.

During the Sonicboom’s match against the Jeonju KCC Egis on Oct. 17, Mullens scored 18 points, nine of which were from 3-point shots. In nine matches, Mullens made 12 3-point shots, a 34.3 percent success rate.

Mullens isn’t the only center in the KBL to expand his repertoire this season.

“Centers shooting 3-point shots is becoming a trend worldwide,” said Wonju Dongbu Promy coach Kim Joo-sung. “Korean basketball is just following that trend. When a big player gets out [of the line], then the defense tends to get loose. If [a center] has the ability to make 3-pointers in that moment, it’ll catch the opponent off guard.”

The trend isn’t entirely new in the KBL. Back when Kim played as center for the Promy, he was known for his 3-point shots.

Now that Kim is the Promy’s coach, he is continuing the club’s tradition of centers being able to throw a lot more 3-pointers. Starting this year, Kim Jong-kyu became the Promy’s center with the league’s highest-ever annual income, at 1.27 billion won ($1 million).

Before joining the Promy, he played for the Changwon LG Sakers and very much followed the traditional format of a center that stays under the net and looks for dunks and rebounds.

But this season, he’s completely changed his playing style. After the Promy’s head coach Lee Sang-bum told Kim Jong-kyu, “Centers have to actively shoot 3-point shots to be more competitive,” he turned himself into a shooter.

To improve on Kim Jong-kyu’s shots, coach Kim Joo-sung trained him, and the change was almost immediate. In nine matches this season, Kim Jong-kyu has made eight 3-point shots and improved his 3-point shot percentage to 34.8 percent.

The 2019-20 season may have just started, but the overall 3-point shot percentage has increased in the KBL this year.

“In the past, in the early 2000s, Seo Jang-hoon and Robert Lazor were the only centers that made 3-point shots,” said basketball commentator Kim Seung-hyun. “But this season, there are a lot of players who are over 2 meters tall and can make mid- to long-range shots. If centers throw 3-point shots, they become untouchable because it’s really hard. If a center has accuracy in their shot, then they are a great option for scoring outside the 3-point line.”

While this is slowly becoming a trend in the KBL, in the NBA, Karl-Anthony Towns of the Minnesota Timberwolves is already notable as a stretch five. At 2.11 meters tall, Towns is not that big for an NBA player, but he still managed to win the NBA rookie of the year award for the 2015-16 season with his outstanding 3-point shots.

“Aside from those that are receiving attention, there are a lot more players practicing mid- to long-range shots,” said Kim Seung-hyun. “Tall players making 3-point shots will also become natural in Korean basketball.”