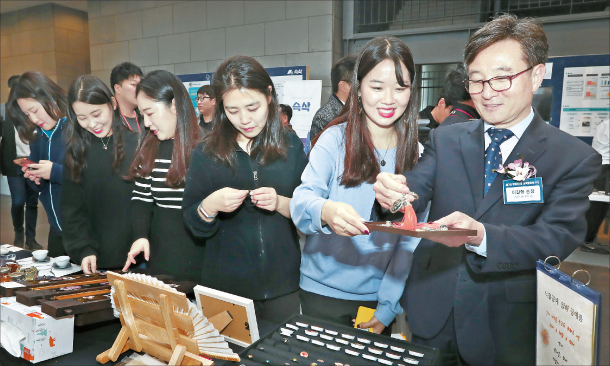 KC University President Lee Gil-hyung, far right, examines products designed by students of the university in collaboration with HEN, a design company that uses mugunghwa, the national flower of Korea, as a motif, at a festival for student-led start-ups funded by the Seoul city government program Campus Town at Chung-Ang University in southern Seoul on Thursday. [PARK SANG-MOON]

Some 40 heads of universities in Seoul, members of the city council and Mayor Park Won-soon put their heads together in a meeting Thursday at Chung-Ang University in southern Seoul to come up with a start-up ecosystem that is friendly for international students in Korea.

One issue the international students have when they try to establish a start-up is their visa status.

“They cannot work here with student visas,” Kim said. “The universities, city government and city council can work together to create an environment where they can.”

The meeting Thursday was one of two or three regular annual meetings held among the heads of 48 universities in Seoul who are members of a city government program known as Campus Town, which funds students’ start-up projects at these universities annually.

Campus Town was established in 2016 and intends to spend 152 billion won ($130.7 million) through 2025 to provide funding and support for both the hardware and software needs of start-ups established by students, such as free office spaces, mentoring programs by entrepreneurs or assistance in legal services. The program has helped at least 197 start-up teams across universities in Seoul as of October last year, according to the city government.

“Just counting the students from China studying in Seoul, there are over 20,000,” said Mayor Park. “The Seoul city government has been encouraging more international companies and start-ups to open their offices in Seoul through various funding and support programs. We intend to support more foreign nationals to run start-ups in Seoul. The diversity in ideas and perspectives that they would bring to Seoul would prove to be very valuable.”

Seoul has a fast-track visa process for start-up entrepreneurs called Oasis, short for Overall Assistance for Start-up Immigration System. Successful trainees are able to obtain visas as entrepreneurs in the city.

On Thursday the members of Campus Town, with Mayor Park and representatives from the Seoul Metropolitan Council, young start-ups established by students, Shinhan Bank, which provides financial counseling for the students, and local district offices, signed a resolution about expanding the budget for the program and adjusting regulations for start-up enterprises.

“There are still a number of regulations that make it difficult for young start-ups to operate in the city,” said Baek Jae-hyun, CEO of Aeol Korea Corporation, a start-up established in 2018 that was funded by Campus Town. “Our company was very much supported by the program’s legal and financial counseling, but regulation is one area that we’d be grateful to see more change.”

“Making it easier for students to gather in an offline space is also important,” said Lee Gil-hyung, president of KC University in western Seoul. “When entrepreneurs come together, that’s when new ideas form and can be shared.”

Students of Campus Town universities showcased their start-ups’ products at Chung-Ang University on Thursday. They also held a competition on Friday. Six winning teams were granted additional support in research and development and consulting.

“We are working with a company named HEN to produce accessories that use actual mugunghwa, the national flower of Korea, to remind the users of their beauty,” said a student of KC University. “If you look closely at our products, you can see that they each contain the actual flower inside.”

A number of other student-led start-ups focused on giving back to the community.

University presidents also agreed on the need to encourage more student-led start-ups to think of creative solutions for the local community.

“I’ve been part of the project from its first year, and I believe that one of the most important objectives of the project is to have a positive impact on the local economy,” said Hansung University President Lee Sang-han during the meeting with other university presidents.

“We are based in Seongbuk District [in central Seoul] and have encouraged the students funded by the Seoul Campus Town project to design products, even if small in scale, which can induce a positive change for the local residents,” said Dongduk Women’s University President Kim Myoung-ae. “Some of our students majoring in arts and design have worked on creating new store signs for the local shopkeepers.”

“We’ve been asking the question whether the student-led start-ups should be encouraged to go global or focus more on providing local solutions,” Park said. “But I don’t think the two necessarily cancel each other out. I think when these projects focus on solving local problems, that will also open doors for them to go global.”