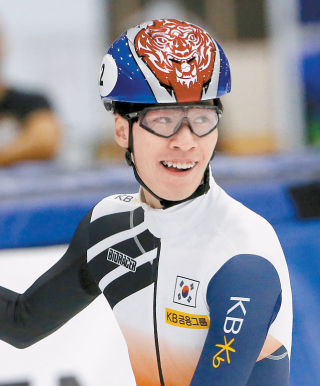 Hwang Dae-heon races in the men’s 1,000 meters at the World Cup at the Utah Olympic Oval on Sunday. [AP/YONHAP]

Hwang hoped to add his third gold in the men’s 5,000-meter relay, but Team Korea ended up finishing second as they finished the race at 6 minutes and 43.743 seconds, a close 0.081 seconds behind Russia.

Throughout the first World Cup event, Hwang was the only member of the Korean men’s and women’s short track team to win gold.

Hwang is continuing his success from last season. At the season-ending ISU Short Track Speed Skating World Championship in Sofia, Bulgaria, Hwang won gold in the men’s 500 meters and picked up silver in the 1,000-meter race. Hwang also won gold in the 5,000-meters relay race. With two golds and a silver, Hwang finished runner-up at the world championship, behind teammate Lim Hyo-jun.

Lim, who won gold at the world championship last season, is not competing this year as he was given a one-year ban for sexually harassing a male teammate while training in June this year.

Surprisingly, the Korean women’s short track team walked away without a medal in the individual races. However, they still picked up silver in the women’s 3,000-meter relay. The women’s team’s struggles came as a surprise as it has tended to be better than the men’s team in the past.

There is a total of six legs of the ISU World Cup Short Track events, with five still to come.

The Korean men’s and women’s short track team will be heading to Montreal to compete in the second leg from Nov. 8 to 10.