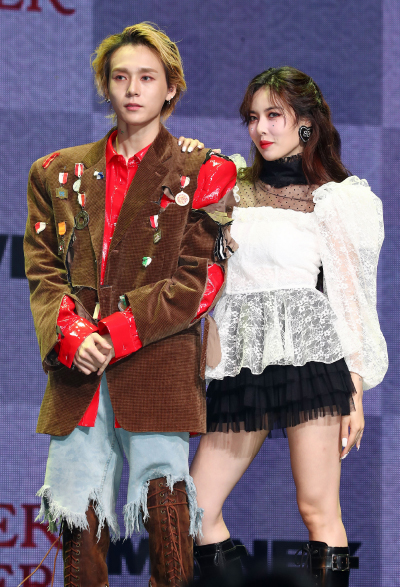 Announcing their relationship may have gotten them kicked out of their former agency Cube Entertainment, but that hasn’t stopped singers HyunA and Dawn - previously known as E’Dawn of boy band Pentagon - from making music. On Tuesday, they made their long-awaited return to the public eye, revealing their first songs with a new agency.

The couple held a joint showcase on Tuesday at Blue Square iMarket Hall in Hannam-dong, central Seoul, for their new singles - “Flower Shower” for HyunA and “Money” for Dawn. Not only are the songs their first releases after the two joined Psy’s entertainment agency P Nation last year, it’s also the first solo song for HyunA since her last hit “Lip & Hip” (2017).

“Doing this together helped to relieve a lot of burden off my shoulders,” said Dawn. “This is my first time working solo, and I was questioning myself a lot about whether I could do this. Yes, there are the staff members, but I was just so nervous. She kept me from being intimidated. And I think that we kept each other strong.”

Both songs were written and produced by Psy. While Dawn’s “Money” is a slow-tempo R&B track that talks about the value of money to young people, HyunA’s “Flower Shower” compares the singer to a flower - she will gladly accept people’s love and attention, but she is also something beautiful and fragile that may break.

“I think of myself as a flower,” she said. “It’s beautiful, but I know that it will wither at some point. So if there’s going to be an end, then I would like to bloom at my most beautiful moment.”

In an industry where dating is considered taboo, the fact that the two singers debuted their latest songs at a joint showcase comes as a surprise. While some fans expressed dismay at their announcement last year, it was a decision they made thinking about what was best for themselves and their fans, according to HyunA.

“We thought so long about it,” she said. “It was actually so difficult to come to the decision of being honest. We knew that from the moment we decided to do so, we were going to have to face our responsibilities and deal with what we had to. But we were afraid that we had to lie and lie and keeping lying to our fans. It scared me to think that I would have to keep lying and pretend that I was being honest.”

Dawn added, “We feel so sorry to the people who were hurt by our decision. But it wasn’t something we did without thinking […] I think it’s only right that we face our responsibilities by working until my bones break.”

Having someone to lean on and talk to right next to you is something that the two feel blessed about, they said.

“I don’t think there’s anything happier than the fact that I have someone who’s always there to talk to. He always gives me the energy and the trust that keeps me smiling on stage,” HyunA said.

“I think it’s rare that you look up to your partner. But she’s just such a great artist, and I respect and love her for that,” Dawn said.

Despite their love for each other, they probably won’t be doing a duet, they said.

“I love him and his music, but the styles and the genres we like are just so different. I don’t think I can work with him,” HyunA said, laughing.