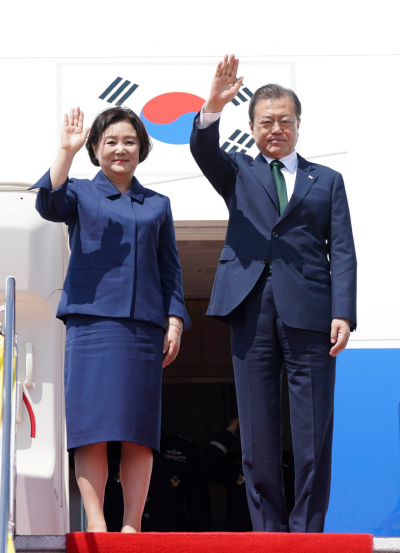 President Moon Jae-in and first lady Kim Jung-sook wave at well-wishers before flying back to Seoul from an airport in Bangkok on Tuesday. [JOINT PRESS CORPS]

President Moon Jae-in said Tuesday that his brief meeting with Japanese Prime Minister Shinzo Abe at a regional forum the previous day could be the start of dialogue between the two countries.

Wrapping up his three-day visit to Bangkok for the Asean summits, Moon posted a Facebook message to summarize his trip. “With Prime Minister Abe, I had a meaningful meeting that could be the start of dialogue,” Moon wrote.

Moon and Abe spoke for the first time in 13 months in an impromptu encounter on the sidelines of Asean summit events. At Moon’s initiative, the two leaders had an 11-minute meeting, accompanied by only their interpreters.

“I also expressed my appreciation to each and every leader who sent a condolence message when my mother died recently,” Moon said, adding that U.S. President Donald Trump also sent a letter of condolence through National Security Advisor Robert O’Brien, who attended the regional events to represent the American leader.

Moon said the participating leaders of the Asean Plus Three and East Asia Summit highly praised their cooperation to counter various crises. “We agreed to closely cooperate in the future on issues concerning terrorism, climate change, disaster control and nurturing talents,” he said.

He also praised the participating countries’ decision to join a major free trade deal of the Asia-Pacific region. At the East Asia Summit in Bangkok, 15 of the 16 participants, including Korea, agreed to sign up to the Regional Comprehensive Economic Partnership, possibly in February next year. India, however, decided not to join.

“The deal will open up the largest free trade market in the world,” Moon said. “It will show the way to an economic community where participants respect each other’s diversity and cooperate.”

Promoting the potentials of Asia, Moon said the Korea-Asean special summit and Korea-Mekong summit will take place in Busan in 20 days. “I hope for the Korean people’s supports for the success of the two summits and the future that Asia will open up,” he said.

While Moon and officials of the Blue House attached significance to the 11-minute talk with Abe, Japanese officials have downplayed its meaning.

Suga also refused to confirm the details of the two leaders’ dialogue or the “amicable mood” the Blue House had earlier described. On Monday, the Blue House announced that Moon had proposed a higher-level discussion - possibly a bilateral summit - and Abe replied that they put forth efforts to find a resolution to the outstanding issues through all possible means.

“As he has already said, Abe replied that pending issues must be resolved through discussions between diplomatic authorities of the two countries,” Suga said.

He also dismissed the possibility that a summit between Moon and Abe could take place on the sidelines of the Korea-China-Japan trilateral summit in China in December. “Nothing has been decided,” Suga said.

“The United States is strongly demanding that Korea withdraw the decision made on Aug. 22 to end the General Security of Military Information Agreement [Gsomia] with Japan,” Yomiuri Shimbun reported Tuesday. “Seoul, therefore, wanted to show Washington that it is talking to Tokyo.”

Another newspaper, Asahi Shimbun, said the Blue House emphasized the “amicable mood” between the two leaders, as Moon’s performances in both domestic and foreign affairs are not successful as his five-year presidency hit a midpoint. “He is rushing to produce an outcome in Korea-Japan relations before the April general elections,” the newspaper said.