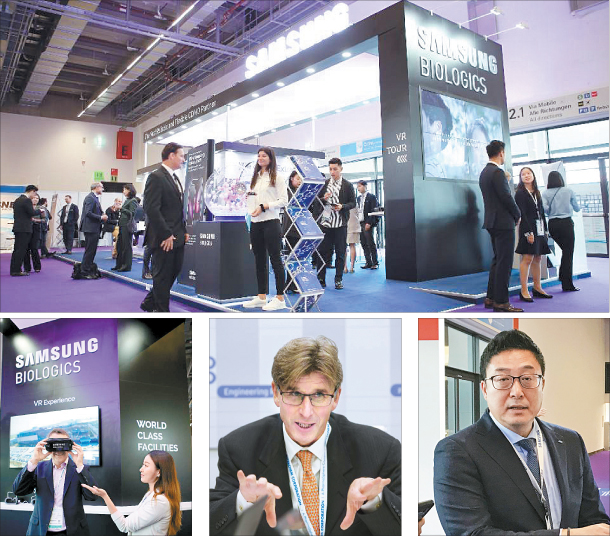 FRANKFURT - Samsung BioLogics has been working to establish itself as a highly competitive contract development and manufacturing organization (CDMO).

At this year’s Convention on Pharmaceutical Ingredients (CPhI) Worldwide 2019, held Nov. 5-7 in Frankfurt, the biopharmaceutical company said it achieved significant progress as a CDMO this year and is betting on potential contracts to further feed its growth next year.

“We already achieved all of our goals for this year and have been on a positive track to truly become an end-to-end solution provider,” said James Park, senior vice president of Samsung BioLogics in charge of business development, on the sidelines of CPhI Worldwide 2019 on Tuesday.

“To align with changing global pharmaceutical industry trends, we have invested in single-use systems and are preparing for more potential CDMO opportunities.”

Samsung BioLogics is one of more than 70 entities from Korea participating in CPhI Worldwide 2019. CPhI Worldwide is the largest conference for the global biopharmaceutical sector and related industries, which has drawn more than 2,500 international exhibitors from 165 countries for this year’s iteration.

For this year’s conference, the Korean biopharmaceutical company opened an 81-square-meter (872-square-foot) booth showcasing its progress and a virtual reality tour program for its third bio manufacturing plant, the largest of its kind in the world.

While introducing the Samsung BioLogics booth at the conference to reporters, Park said he believes that the company can find additional CDMO opportunities depending on the results of the Phase 3 clinical study of a Biogen candidate therapy expected to be announced later this year.

If the result is positive and signals hope for the treatment’s approval by the U.S. Food and Drug Administration, the Korean company could receive production requests from global biopharmaceutical companies seeking to be more competitive.

“There are around 20 players in the global biopharmaceutical industry investing in developing an Alzheimer’s disease treatment,” Park added. “Our company has proven CDMO capabilities with flexibility, scalability and reliability.”


A future in single-use

Since 2017, Samsung BioLogics has been transforming its business from just a contract manufacturing organization (CMO) to a CDMO as a means to fulfill a more diverse range of orders from other pharmaceutical companies.

And to attract more clients, the company has also invested in enhancing its single-use system capabilities.

“In the past, contract manufacturing meant producing blockbuster drugs in large volumes for big pharma, but things have changed recently,” Park said.

“Now, more and more small- and medium-sized players are jumping into drug development, and many want their candidate drugs to be manufactured in smaller quantities.”

While traditional large-scale production using stainless steel multi-use bio reactors has been the mainstream trend for the global industry, more companies are vying for opportunities to reduce uncertainties and spend less on maintenance.

Single-use systems, while not appropriate for large-scale operations, use disposable equipment to enable the faster development and marketing of products.

The technology has been gaining popularity among drug makers for use in the pre-clinical and clinical testing stages of their products.

The system has been widely sought by the clients of Samsung BioLogics actually producing drugs rather than those making drug substances.

“When we first started our facility, we were waiting for large-scale orders from clients, so our obvious choice was initially stainless steel,” said Richard Lee, head of the drug product business unit at Samsung BioLogics during a session on the company’s CMO client experience Tuesday.

“Back in the day, we primarily had large pharma with huge supply demands, but these days, the whole characteristic has changed. We are now faced with assisting all kinds of different customer needs.”

As a comparatively novel competitor in the global CDMO race, Lee said gaining trust and approval from clients and health authorities has been one of the main challenges for the company in drawing orders for single-use systems.

Lead time was longer than expected, and customizing systems for individual clients was already difficult in the early stage, but ensuring the safety and efficacy of its single-use systems has been a major task for Samsung BioLogics, added Brad Larson, executive director of drug product account development at Samsung BioLogics, as a co-presenter during the session.

“For some, they were concerned with the whole process being single-use,” Lee said. “What if the bags leak? What if contamination happens? They had all kinds of concerns. Concerns came from higher-ups saying ‘I’m not sure I feel comfortable.’”

In tackling that issue, Lee said the company filed “hundreds of pages of extra studies and reports” for global health authorities. Samsung BioLogics assembled a team of nine employees to fly out of Korea and engage with clients, vendors and authorities to demonstrate the process and answer questions.

“As a CMO, your success is our success at the end of the day,” Lee said. “Engaging with vendors, knowing your product and engaging for product approval are pivotal for success of single-use systems, and Samsung BioLogics has made noticeable progress in that respect.”

The company added it has produced all single-use drug product batches without failure to date, which has played a role in Samsung BioLogics gaining more than 20 regulatory approvals around the world on using single-use systems.

While Samsung BioLogics seems to be betting everything on single-use systems, the company is still heavily weighted toward manufacturing with multi-use systems, and it is betting on recently introduced “N-1 Perfusion” technology used at its third plant in Songdo, Incheon, to play a vital role for that purpose.

The plant, which started operations in October last year, is the largest of its kind in the world.

“We saw an increase in the number of clients after we applied the technology,” said Ken Green, head of cell culture manufacturing at Samsung BioLogics, who played a large role in implementing N-1 Perfusion technology at the third plant, during an interview with reporters Tuesday.

“The technology really helps with productivity, as we have a shorter production window now.”

By using a specialized filter, the N-1 Perfusion system can filter and separate the waste from growing cells without contaminating the batch, which gives more room for cells for grow.

The technology has enabled Samsung BioLogics to cut production time by up to 30 percent for up to 3,000 liters of cells at its third bio manufacturing plant. At the factory, cells can be cultured at up to 10 times the density compared with other cell culture batches.

With this upgrade, the company now has 362,000 liters in total capacity supported by more than 2,370 employees.

More pharmaceutical companies have expressed interest in having Samsung BioLogics produce drug substances, Green said, adding that it is not that simple to apply the N-1 Perfusion system in such large scale.

Shortening the production timeline while increasing efficiency, also known as “driving continuous improvement” within the industry, has been considered an important skill to be developed but remained off hands for the most part due to risks in quality management.

“There will be changes in temperature, environment and contamination level throughout N-1 Perfusion process,” Green said.

“Very few companies are running the technology at the scale we are at this point. Going in larger quantities means much bigger financial risk, and the technology related to it is more challenging when applied large scale.”

“It took us about six months to apply [the large-scale version of N-1 Perfusion system, Green added. “It normally would take up to a whole year to do this.”

He believes that Samsung BioLogics benefits from being under the Samsung Group as a whole, which has taught the biopharmaceutical company some lessons with regard to how to maintain a clean manufacturing environment, just like how Samsung Electronics must keep rooms free of contamination making semiconductors.

The company also benefitted in designing its plants from its relationship with the construction companies within the Samsung Group.

Green said that the company has been working to become a modern corporate entity with a pick of the best employees.

“We have a clear strategy for growth, and I think the culture has been very good,” Green added. “A lot of our processes are built on getting the right mix of personnel and the right processes.”

From focusing on both large-scale manufacturing projects and small-scale contracts, Samsung BioLogics believes that it has the potential to stay competitive in the growing biopharmaceutical industry.

But there’s still room for improvement for Samsung BioLogics.

The company promises to provide everything needed for a drug candidate to be researched, developed and manufactured, but Samsung BioLogics remains heavily weighted toward the lower-value-added end of the spectrum, focused on acting as a contract development organization and a CMO for the most part.

Improvement is needed for Samsung BioLogics to provide necessary testing and evaluation services for candidate therapies at all steps along the way.

The company recently added biosafety testing services (BTS) to help it provide an end-to-end development and manufacturing solution for its clients, but the program mostly focuses on providing that service at the manufacturing process end, which is just one of many testing periods needed to ensure the safety and efficacy of candidate therapies being developed.

The company is also looking to improve its capability as a contract research organization, which is still in the early stage of development. Unlike major pharmaceutical players with decades of experience in the field, the Korean company lacks the expertise and skills needed to fully assist research efforts for its clients at this point.

Samsung BioLogics also needs to improve its success rate in making batches of cells for its clients although it already is at a high standard. While the success rate for the company’s CDMO operations has remained higher than 98 percent, the biopharmaceutical company is working toward achieving 100 percent by removing risks of human error.

“Most of our deviations are related to human errors,” Green said.

“What we do now is we start a program to learn how we can reduce human error, and I think for us this is a very big opportunity.”

To reach 100 percent in the near future, Green said Samsung BioLogics is looking to continue hiring innovative talent while trying out new features as needed to improve its product quality and client satisfaction.

“To reduce waste levels and the deviation rate while streamlining processes, being open to new technologies and innovation is important, so we are trying to keep moving in that direction,” Green added.

As a competitor in the global biopharmaceutical race looking to stay on or ahead of the curve, Samsung BioLogics has been looking to position itself as a key end-to-end drug development and manufacturing partner within the sector.

Although a number of additional steps are needed for Samsung BioLogics to become a true end-to-end solutions provider, the company is sure that it is well on its way to making that happen.