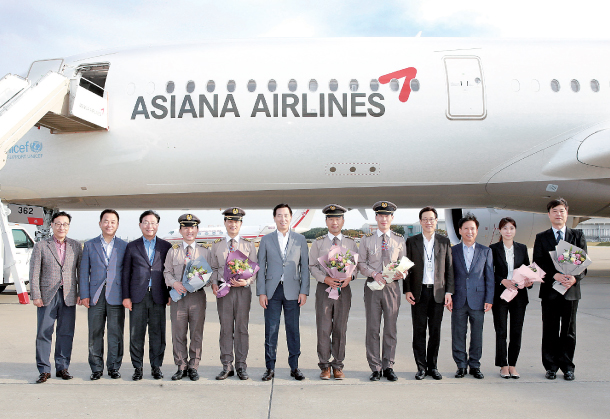 Asiana Airlines is developing flights to new destinations in an effort to strengthen its competitiveness in the market. [ASIANA AIRLINES]

Asiana Airlines is undergoing numerous efforts to increase its profits while cutting down on expenses during tough times.

Maintaining the Asiana Airlines brand equity is vital since the company is up for sale.

Routes to China have heightened expectations for Asiana Airlines’ performance, showing a huge increase in the number of passengers compared to recent years, when tensions were high due to retaliation of the U.S.-led Terminal High Altitude Area Defense antimissile system.

In order to best manage the country, China was divided up into six regions with managers appointed to each region.

That was one of the many efforts to compensate for the loss made in the number of Korea-Japan flights and new destinations for flights being planned.

Asiana Airlines is also focusing on long-distance flights by improving the flight schedules for major destinations.

Starting from November, two additional daily flights to New York City have been scheduled, and in December, irregular flights to Melbourne in Australia and Cairo are expected.

More electronic kiosks will be available following the trend of passengers wishing to take care of check-in and other services by themselves.

An AI chatting service called Aaron is also bringing higher efficiency while cutting down on expenses.

Currently, there is an average of 1,400 users utilizing Aaron each day to check flight schedules, reservations and ticketing services thanks to its 24-hour availability.

Asiana Airlines is also replacing its old airplanes with newer models that have higher fuel efficiency, including the A350 and A321NEO models.

With efforts such as strengthening its IT competitiveness, providing more flight options to passengers and cutting down on expenses, Asiana Airlines is expecting to show a better performance and improve its revenue structure.