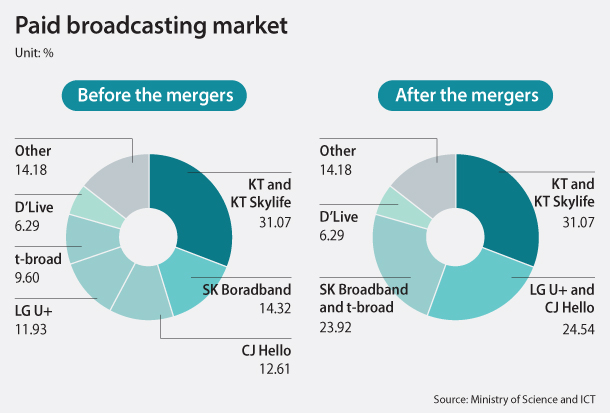 Two major transactions in Korean media have been approved, according to an announcement made by the government Friday.

The deals are set to transform the entertainment landscape in the country.

The merger of SK Broadband, an SK Telecom subsidiary, and t-broad was conditionally approved by the Fair Trade Commission (FTC) on Nov. 6. The FTC also approved LG U+ acquiring 50 percent plus a share of CJ Hello, the largest cable TV operator.

With the transactions, LG U+ overtakes SK Broadband and moves closer to KT in paid broadcasting.

The announcement signals a sea change in thinking.

In 2016, the government denied SK Telecom’s request to merge with CJ Hello, citing concerns about the limiting of competition. But the government said it has changed its stance to reflect changes in the industry.

“We have decided to approve the merger and acquisitions of the relevant enterprises to foster competition for revolution and to enable broadcasting operators and telecom firms to timely respond to the rapidly changing environment and technologies,” said FTC chief Joh Sung-wook Wednesday.

Media services like Netflix have disrupted the paid broadcasting market and forced players to join together and build their capacity in order to fend off the competition.

“Unlike three years ago, the paid broadcasting market has been reorganized to revolve on digital [content],” said Joh. “Consumer convenience that could be generated from the merger has been considered.”

“[The government approval] signals a shift in the paid broadcasting market, which includes cable TV, IPTV and satellite TV, to be reorganized based on telecommunications operators,” said Professor Sung Dong-kyu, who teaches media and communication at Chung-Ang University.

The embrace of cable TV 10 years after IPTV appeared in 2008 marks a crucial point in the paid broadcasting service market, according to Sung.

Because of concerns about monopolization, the FTC made the recent approvals conditional. The government is imposing certain restrictions, such as: limiting the increases of cable TV subscription rates to the inflation rate, banning the arbitrary reduction of the number of channels and prohibiting the coercion of customers to change to more expensive subscription plans.

The firms can apply to have these restrictions lifted after a year.

Banning cross-selling, like selling t-broad services on SK Broadband, was expected to be included as a condition, but it wasn’t. The FTC explained it excluded that measure to raise the efficiency of the mergers and in consideration of convenience.

“We have decided not to ban cross-selling since there are additional measures that can be taken, like prohibiting price increases or reducing the number of channels or types of channels,” said Joh.

“It isn’t bad for the relevant companies to share their distribution networks from the consumer convenience perspective.”

The paid broadcasting market has been dominated by KT, with a 31.07 percent share, but the recent deals would put LG U+ in second place, with 24.54 percent, and SK Broadband down to a close third, with 23.92 percent.