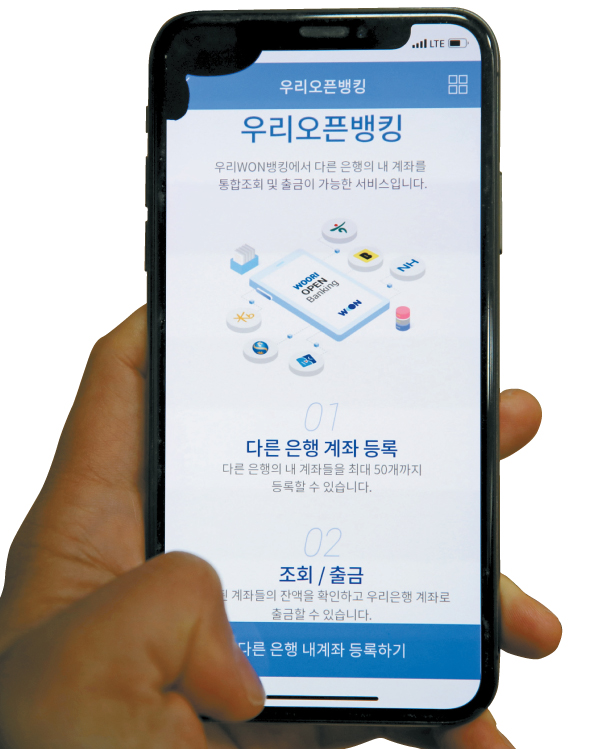 A screen for an open banking platform is shown on Oct. 30 when 10 banks opened a pilot test for the open banking system. [YONHAP]

Open banking was to revolutionize the business by allowing for seamless exchanges between financial institutions as apps from one would be able to connect with accounts from another.

A trial run was started in Korea last month, and while open banking is working, it is not yet living up to its promise.

The Financial Services Commission (FSC), Korea’s top financial regulator, and major banks initially promoted the open banking system saying it would enable the checking of account balances at all participating banks using the app of just one. They also indicated that the same sort of cross-institution access would be possible in making transfers. 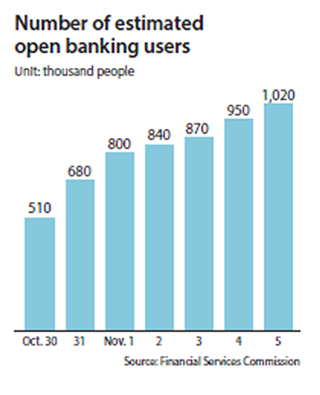 Application programming interfaces, or APIs, can permit direct links between the IT systems of banks.

The reality has been somewhat short of expectations. The apps do enable simple and instant connections for the checking of account balances. But in terms of making transactions, open banking did not yet meet expectations.

On the 1Q Bank app by KEB Hana Bank, you can take out money from any account from participating banks, but the money can only be transferred to a KEB Hana Bank account. Transfers between two accounts not related to KEB Hana are not possible.

The first drop down only offers the customers a single option: KEB Hana Bank.

But with apps from larger peers, such as Shinhan Bank and KB Kookmin Bank, third-bank transfers can be executed.

While a user is able to track balances at all participating banks, the feature won’t likely appeal to many as other fintech apps already offer the cross-bank account checking service.

The financial regulator said that the shortcomings will be addressed when the service officially launches in December.

“Some banks wouldn’t be able to provide remittances between different banks, but that will be fixed before Dec. 18 when the service fully comes into effect,” the regulator said in a statement.

The number of users hit 1 million as of Nov. 5, and the number of registered accounts reached 1.83 million, according to the regulator.

As major financial institutions vie to get an upper hand in the race to lock more users into their open banking services, they are releasing a series of related functions.

Shinhan Bank, for instance, launched a wealth management service for its open banking users, recommending financial products based on the data from different banks and other information recorded by users.

It also plans to introduce new functions on its open banking platform.

“We plan to launch new functions like ‘drag and drop,’ where users can transfer money across different accounts more conveniently by simply dragging and dropping the buttons,” said a spokesperson at Shinhan.

“We have known that many people receive their salary and bonuses in differing accounts,” said a KB spokesperson.