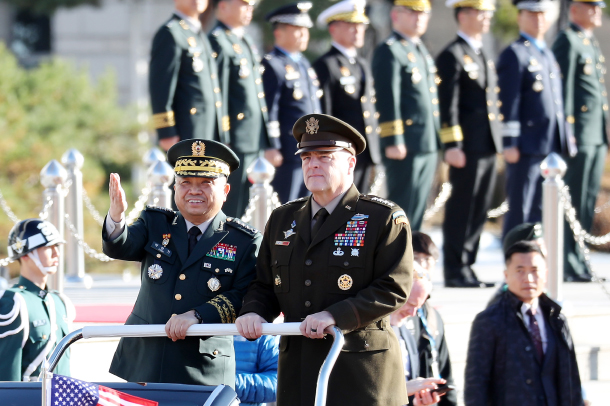 Gen. Park Han-ki, left, chairman of South Korea’s Joint Chiefs of Staff, and his U.S. counterpart, Gen. Mark Milley, right, inspect an honor guard at a ceremony at the JCS headquarters in Seoul on Thursday to welcome the visiting U.S. military leader. [YONHAP]

U.S. Defense Secretary Mark Esper said Wednesday en route to Seoul that Washington may “adjust” joint military exercises with South Korea depending on how diplomacy with the North unfolds, but it is not considering a reduction of U.S. troops on the peninsula at the moment.

Esper, when asked by a reporter if there was a need for a reduction of U.S. troops on the Korean Peninsula, replied, “I don’t think at this time. We maintain a highly capable set of forces on the peninsula, immediately off the peninsula. So we’re prepared for any contingency at any time.”

However, on scaling down joint military exercises with Seoul, Esper said, according to a Pentagon transcript, “We will adjust our exercise posture either more or less depending on what diplomacy may require.”

Esper arrived in Seoul Thursday to hold annual defense talks. He raised the issues as several top U.S. officials have visited Seoul amid tough negotiations over a defense cost-sharing agreement and as Seoul prepares to withdraw from a bilateral intelligence-sharing pact with Tokyo next week.

Esper said Wednesday that “job No. 1 for us is to remain ready [and] ensure that we’re in a proper readiness posture in case the worst happens so we can conduct our wartime missions.”

He elaborated that “adjusting” joint exercises could mean “either dialing up, or dialing down, exercises and training” and would be “in close collaboration with our [South] Korean partners, not as a concession to North Korea or anything, but again, as a means to keep the door open to diplomacy.”

Amid a deadlock in denuclearization talks, North Korea has told the United States to come up with a new proposal to move forward negotiations by the end of the year. Early last month in Stockholm, the two sides were not able to make progress in the first working-level talks since the second North-U.S. summit collapsed in Hanoi, Vietnam, in February.

Esper said, “I think we have to be open to all those things and empower and enable our diplomats to sit down with the North Koreans — alongside our South Korean partners — and move the ball forward to a negotiated settlement of the issues that we put on the table.”

Pyongyang has regularly lambasted joint military drills between Seoul and Washington, which it sees as a threat. U.S. President Donald Trump acknowledged such concerns and called the joint war games “expensive” and “provocative” after his first summit with North Korean leader Kim Jong-un on June 12, 2018, in Singapore.

The United States was on a “path to war” back in 2017, said Esper, because it was “very clear” the U.S. Army “was making preparations.” He added, “I think it’s due to President Trump’s initiative diplomacy that we were able to dial that back down.”

Likewise, he said that while Washington takes the launch of short-range ballistic missiles seriously, it is “not going to overreact and do something that, for example, could close the door to diplomacy.”

Washington will continue to “maintain readiness on the peninsula,” said Esper, which “gives our diplomats the surety that they have our backing and allows them to do their job.”

He added that the “best path forward is through a political arrangement, if you will.”

President Moon Jae-in is expected to meet with Esper and Mark Milley, chairman of the U.S. Joint Chiefs of Staff (JCS), in the Blue House Friday. The annual South Korea-U.S. Military Committee Meeting between the JSC chiefs was held on Thursday, and a Security Consultative Meeting between defense chiefs was set for Friday.

The General Security of Military Information Agreement (Gsomia) between Seoul and Tokyo expires at midnight Nov. 22, three months after the Blue House announced its decision to terminate the pact in response to Japan’s removal of South Korea from a so-called white list of trusted trading partners. Seoul and Washington are also in talks to renew their bilateral defense cost-sharing pact, the Special Measures Agreement (SMA), as the current one-year deal expires on Dec. 31. Washington has been urging Seoul to pay as much as fivefold the current amount, or nearly $5 billion.

Esper, when asked on the defense cost-sharing talks, said, “There needs to be greater commitment to their own defense,” which he said was his message to U.S. allies in Asia and Europe, and the metric is “2 percent GDP as the floor.”

But he added, “And then there’s burden sharing, which goes beyond that. And that is, how do we offset U.S. costs for forward-deployed forces?”

When asked if Washington is asking Seoul for a fivefold increase, Esper said he was “not going to speak to the number” but confirmed that the United States has “asked for a significant increase in the cost sharing for our deployed troops.”

Milley on Monday told reporters ahead of his trip to Asia that the average American would question the necessity of U.S. troops in South Korea and Japan and why wealthy nations can’t defend themselves. He said that his job was to explain that the “U.S. military is a stabilizing force in Northeast Asia.”

Esper also told reporters his “message will be very clear” that Gsomia “must be maintained,” stressing that the pact is “critical to sharing intelligence, particularly in a timely manner in regard to any type of North Korean action.”

Esper added, “I will urge my fellow ministers to get beyond these issues” to “focus on how we partner as allies to deter North Korean bad behavior” and, “in the long term, deal with the Chinese.”

Washington sees Gsomia, signed in 2016, as a pillar of trilateral security cooperation with Seoul and Tokyo.

“The only folks who are benefiting from this dispute right now are North Korea and China,” he said, “and that is all the reason why we need to move beyond this and get back to where we were in terms of working together as partners and allies.”

When asked about his outlook on making progress on the issue, he said, “I’m an optimistic person. I hope we will.”

However, Seoul has maintained it will withdraw from Gsomia unless there is a change in Tokyo’s export restrictions. The export restrictions, which Japan claims were implemented due to trust and security issues, are widely seen as retaliation for the South Korean Supreme Court’s rulings that Japanese companies must individually compensate Korean victims of forced labor during World War II.

Esper was on a trip to Asia that would also take him to Thailand for the Asean Defense Ministers’ Meeting Plus (ADMM-Plus) and also to the Philippines and Vietnam.

South Korean Defense Minister Jeong Kyeong-doo and Japanese Defense Minister Taro Kono are in the final stages of scheduling talks on the sidelines of the ADMM-Plus meeting in Bangkok early next week ahead of the Gsomia termination.

Choi Hyun-soo, spokesperson for the South Korean Defense Ministry, said Thursday in a press briefing, “If Japan withdraws unfair retaliatory measures and friendly relations between the two countries are restored, various measures can be reconsidered, including Gsomia.”