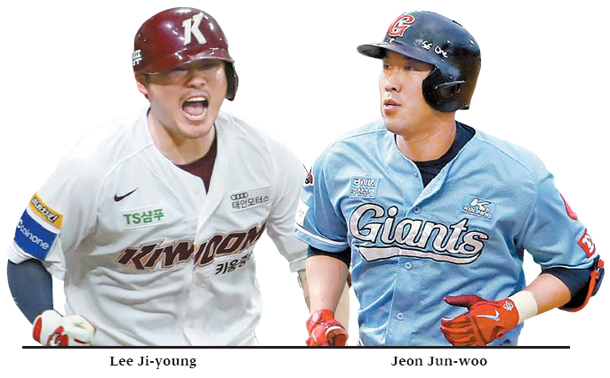 It’s been almost two weeks since the KBO’s free agent market officially opened, but there has barely been any contracts signed yet.

On Nov. 3, the KBO announced a total of 19 players who are eligible to be free agents this year. A day later on Nov. 4, the negotiation period officially began. Over the past three years, the KBO has seen big signings with free agents picking up contracts that easily exceeded 10 billion won ($8.6 million).

But this year, it’s a completely different story.

As of Friday, only one of this year’s free agents has signed a contract. The Kiwoom Heroes announced the signing of catcher Lee Ji-young on Wednesday. The two agreed a three-year contract at 1.8 billion won.

When the 2019 season ended, many expected that the Lotte Giants would once again be the biggest spenders in the free agent market. This season, they finished at the bottom of the table with 48 wins, three draws and 93 losses.

Not only are the Giants in need of a comeback, they’re usually not afraid to spend big, signing record contracts over the past three seasons. In January 2017, they signed a four-year contract with Lee Dae-ho at 15 billion won. Then, when the 2017 season ended, they spent 9.8 billion won on Son Ah-seop and another 8 billion won signing Min Byung-hun.

Of the 18 players left on the market, Giants’ outfielder Jeon Jun-woo had been continuously mentioned as the biggest name. But there still haven’t been any reports about him signing. Jeon has become a well-known figure in the KBO over the past two seasons.

So far the only thing the Giants have done is sign a two-year contract with pitcher Noh Kyung-eun at 1.1 billion won. Noh became a free agent last year but skipped the entire 2019 season as he failed to sign a contract.

Doosan Bears captain Oh Jae-won is also on the market this year, but there haven’t been any reports regarding contract negotiations.
When the Bears won the Korean Series, they immediately re-signed a record-breaking three-year contract with manager Kim Tae-hyung at 2.8 billion won. But with Oh, they are taking their time.

As Bears captain Oh has been leading the team both on and off the field. Although he struggled throughout the regular season this year, he proved his worth in the Korean Series. Oh played in all four games for the Bears in the Korean Series and had an impressive 0.500 batting average with three RBIs to lead the team to its sixth championship title.

In addition to not having any big names in the free agent market this year, the clubs are also hesitant as the players tend to be older. The majority of the free agents this year are in their mid-30s, with the exception of the LG Twins’ Oh Ji-hwan and the Kia Tigers’ An Chi-hong and Kim Sun-bin, who are all 29 years old.

Due to this, the clubs are instead focused on the second draft or trades, rather than the free agent market this year.