Failure of talks leads to a strike at Korail

Failure of talks leads to a strike at Korail 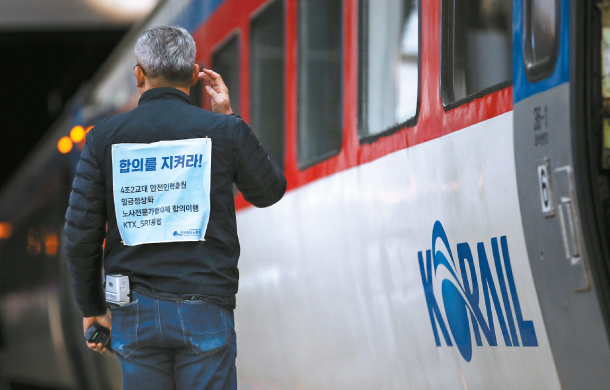 A Korail employee wears a sign with the union’s demands at Seoul Station in central Seoul on Tuesday. The Korean Rail Workers’ Union will strike for an indefinite period from today. [YONHAP]

The Korean Railway Workers’ Union (KRWU) will likely go on strike today for an indefinite period after failing to reach a breakthrough in wage negotiations with management by the Tuesday deadline.

Although the KRWU chairman said the union was open to dialogue even after final talks with state-backed rail operator Korail broke down earlier on Tuesday, the two sides failed to reach an agreement as of press time.

“The KRWU will go on strike from tomorrow as planned,” said Cho Sang-soo, leader of the union at the Korail headquarters in Seoul. “If the government makes a proposal acceptable to the union, we will keep the door open for talks.”

The latest move follows a three-day strike last month that was intended to warn the rail operator of the union’s frustrations at the impasse in negotiations.

The dispute between labor and Korail revolves around demands to increase total wages by 4 percent and hire an additional 4,000 workers for next year to prepare for a new shift system.

Korail has said it would be difficult for wages to rise above the government recommendation for state-backed companies of 1.8 percent, while it plans to hire only 1,800 more workers.

A new strike is expected to have a limited impact on rail operations right away as labor laws mandate the passenger rail industry maintain certain workforce levels during strikes as it is an essential industry. The government and Korail have also prepared substitute workers.

According to the Ministry of Land, Infrastructure and Transport, high-speed KTX rail operations will operate at 68.9 percent of their usual rate, while subways operated by Korail on the outskirts of Seoul will run at 82.0 percent.

The Transport Ministry said it would especially focus on subways during commuting hours, saying they will run at 92.5 percent in the morning and at 84.2 percent in the evening.

If the strike continues beyond four weeks, the government expects KTX operation rates to drop to 56.7 percent, the minimum mandated rate, due to operational fatigue among replacement workers.

“As with the strike in October, the Transport Ministry will work with other government branches such as the Ministry of National Defense to secure replacement conductors and increase alternative modes of transportation such as buses,” said Kim Kyung-wook, vice minister of transport on Monday.