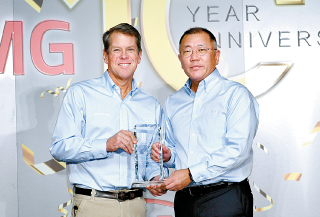 Kia Motors said it has produced 3 million cars at its Georgia plant over the last 10 years on Monday.

The plant, which is celebrating its 10th birthday, started operations in November 2009, producing Sorento SUVs. In the first year, the plant produced some 15,000 cars. In September this year the plant passed the 3-million-vehicle mark, according to Kia.

The carmaker said the factory has contributed to expanding its presence in the U.S. auto market.

“Even while the U.S. auto market has contracted this year, sales of Kia cars through October increased by 3.3 percent year-on-year,” Kia said in statement. “Among the Kia cars sold in that period, the three models produced at the Georgia plant - Optima, Sorento and Telluride - account for over 40 percent.”

While the plant started producing the Telluride SUV from February this year, the model has already proven popular in the U.S. market, boosting sales.

An average of 5,600 Tellurides have been sold every month from March through October, according to Kia.

“Dealers are striving to secure Tellurides, as supply falls behind demand,” a spokesperson from Kia said.

According to Kia Tuesday, the car was selected the winner of MotorTrend’s 2020 SUV of the Year award. The auto magazine has been announcing winners at the end of each year since 1999. The Telluride is the first Korean car to win the SUV of the Year award. The SUV was evaluated alongside seven other finalists including the Audi e-tron, BMW X5 and Porsche Cayenne on six key criteria including safety, design and driving performance. Last year’s winner was Jeep’s Wrangler.

The carmaker said it will raise this year’s Telluride production target from 60,000 units to 80,000, considering demand.

“The support we have received since the very beginning - from state and local governments, civic organizations and various partners - has been critical to the success of Kia’s first American plant,” said Euisun Chung, executive vice chairman of Hyundai Motor Group, at a ceremony in Georgia on Monday.

Chung added that Hyundai Motor Group and Kia Motors will become paradigm-shifters as the the global auto industry is rapidly disrupted.

“We will offer the world’s best smart mobility services, expanding our horizons beyond vehicle production,” Chung said. “In the future we will manufacture not only cars but also personal air vehicles and robots, as well as offer all related services.”

The Georgia plant has the capacity to produce 340,000 cars a year. It is the third overseas production base of Kia, after plants built in China and Europe.